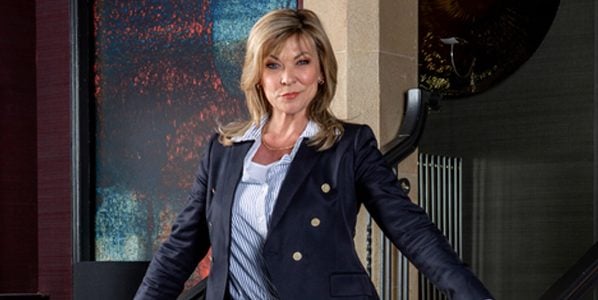 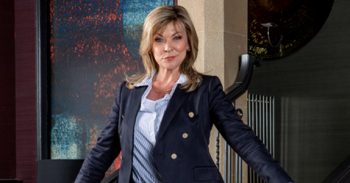 Emmerdale fans divided over Kim Tate character – should she be axed?

Are you a fan?

Ever since Kim Tate returned to Emmerdale, the soap legend has been neck deep in villainy.

She ran Joe Tate out of town, tried to frame Cain for his death, attempted to break up Rhona and Pete (not that it needed much) and has become the new owner of the Sharma business – devastating Jai in the process.

And that’s before she’s even had breakfast!

Months after her hugely anticipated comeback, some viewers have slammed the character for being “boring” and have begged scriptwriters to give her the chop.

Sharing their thoughts on Digital Spy Forums, one wrote: “Emmerdale’s Kim Tate is so boring. I can’t take her seriously. Perhaps it is because we have so many ‘baddies’ but, to me, she has been lost in the crowd.

“Standing about making silly faces just doesn’t cut it with me. When Andrea came in as Jamie’s wife, I had hopes that she would put her ladyship in her place, but she fell by the wayside at the first sign of the money for a posh school. Hey ho.”

Another thought the same, typing: “I agree, she acts like she is in panto and I expect her to slap her thigh at any moment.

“The faces she pulls, the pointing finger, gets on my nerves.”

A third added: “I think it was a mistake to bring Kim back. We remember her as a feisty, interesting woman, but now she is just a dull, pantomime granny.

“The silly faces she pulls are quite funny though. Perhaps if they had recast the character with another actress it would have worked.”

“The return of Kim has been horrible and she is nothing but a cartoon villain who will eventually be killed off in a murder mystery,” added one more. “The past is often best left in the past.”

But Kim does have her fans, with one insisting she’s a great addition to the show.

They wrote: “I like her. I never know what she’s going to say or do next.”

Another said: “I think her best scenes are when she is interacting with her grandchild and looks a bit more normal and relaxed.”

A third simply said: “Kim’s an iconic character whether you agree or not. End of story.”

“Well for me, Kim is one of the few I like in what has now become a rather poor show,” lamented another, while one more said they loved her!

They wrote: “She’s so ballsy and manipulative! Could just do with less gurning, but don’t change her mischief-making. She doesn’t give a damn what people think!

“I too have loved the way she has adapted to being ‘grandma’, although it goes against her hard woman image.”

Earlier this year, some fans accused Kim of ‘ruining the ITV soap’… Do you agree?

Is Kim Tate a hit or a miss? Leave us a comment on our Facebook page @EntertainmentDailyFix and let us know what you think!