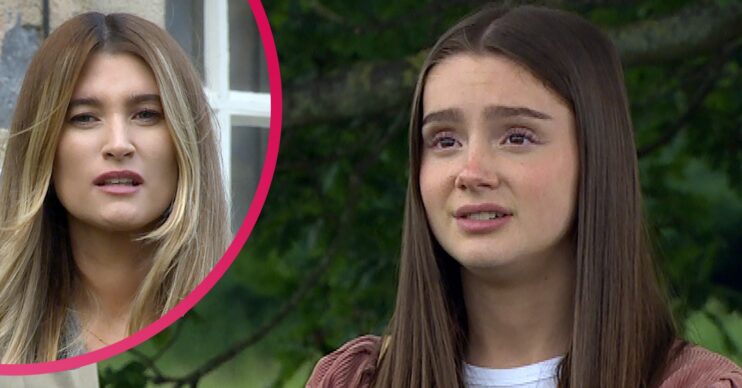 Emmerdale: Where is Sarah’s mum Debbie and what happened to dad Andy?

Emmerdale character Sarah was upset this week when grandmother Charity forget her birthday.

But who are Sarah’s parents and where are they?

Read more: Who plays Sarah in Emmerdale? How old is Katie Hill?

Emmerdale: Who are Sarah’s parents?

Sarah is the daughter of Debbie Dingle and Andy Sugden.

When Debbie was 15 she discovered she was pregnant with boyfriend Andy’s baby.

She was determined to keep the pregnancy secret.

She managed to hide it from everyone, except for Andy’s brother, Daz Eden.

Debbie wanted to have her baby alone in hospital and have it adopted, but she unexpectedly gave birth in the woods.

She struggled to bond with her daughter and wanted Paddy and Emily Kirk to have her.

Eventually Sarah went to live with Andy and his girlfriend, later wife, Jo Stiles. But when Andy was sent to prison, Debbie and Sarah began to form a bond.

Later, Andy and Debbie fought for custody of their daughter until Andy withdrew his application and Sarah stayed with her mum.

Where is Debbie Dingle now?

Debbie moved to Scotland in 2019 with her son Jack to run the garage that Lisa had left to her and Belle.

Sarah made the decision to stay in the village with Charity.

In 2020 Debbie returned to the village for Chas and Paddy’s wedding.

It was also revealed that Debbie was the one Al Chapman had been having a secret affair with.

When Debbie found out Al was engaged to Priya Sharma, she told Priya and they confronted him.

In 2021, Debbie made the decision to return to Scotland, which is where she is still living.

What happened to Andy Sugden?

Before his exit, Andy had a fling with Chrissie White – his former sister-in-law.

But Chrissie was furious when she found out he slept with Bernice, who by now was her stepmother.

Chrissie framed Andy for shooting her father Lawrence. However the real shooter was Chrissie’s son, Lachlan.

With the help of Bernice and adoptive brother Robert, Andy fled the village on the day of his trial.

His whereabouts are currently unknown.