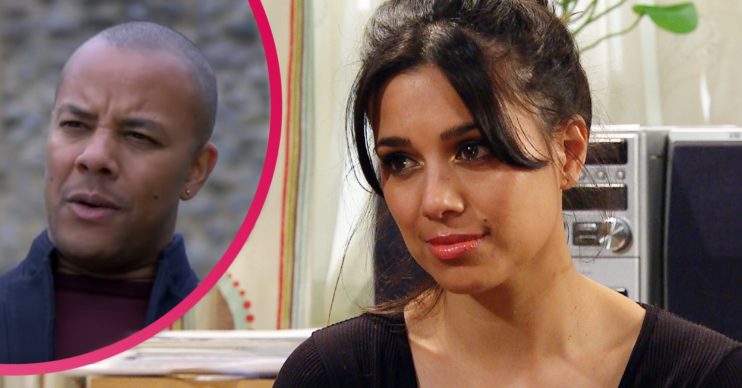 Who is Priya Sharma in Emmerdale?

Will Priya Sharma ever be lucky in love?

Priya Sharma hasn’t had a lot of joy in her time in Emmerdale but we’re always hopeful that something good could be just around the corner for her.

She’s currently facing her biggest challenge of all as she recovers from life-changing burns and battles her eating disorder again.

So who is Priya and what has happened to her since she arrived in the village in 2009?

Priya Sharma in Emmerdale: Who is she and who is her family?

Priya Sharma in Emmerdale is the daughter of Rishi Sharma and Georgia Sharma, and younger sister of Nikhil and Jai.

She arrived in Emmerdale back in 2009 when she was a real party girl, living it up with mate Eli Dingle.

She left for a while and when she returned to the village in 2010 – this time played by Fiona Wade – she was thrown into her first unlucky love affair.

An ill-fated romance with Cain Dingle was first for Priya, but their affair ended when she discovered he’d got Amy Wyatt pregnant.

Next, Priya fell head over heels for David Metcalfe and the pair began a romance. But that wasn’t easy either. David was married to Alicia Metcalfe though their relationship was a fake.

They’d decided to tie the knot before Alicia went to prison, because she was worried that her son, Jacob Gallagher, would be returned to his biological father.

So David and Alicia said ‘I do’ and Jacob stayed with his doting stepdad.

With Alicia out of the nick, and her and David’s marriage over, Priya and David got engaged.

But when Cameron Murray held the Woolpack up in an armed siege, poor Alicia got shot. David went with her to hospital and it was clear the pair had feelings for one another.

And so, he jilted poor Priya on their wedding day.

With David happily loved up with Alicia, Priya discovered she was pregnant with his baby.

She struggled through her pregnancy because she was suffering from an eating disorder, and had a dramatic birth. But thankfully, baby Amba was soon fighting fit, and Priya recovered.

Things go from bad to worse for Priya Sharma in Emmerdale

Rakesh was soon revealed to be totally untrustworthy. He faked paternity test results to trick son Kirin into thinking he wasn’t the father of Vanessa Woodfield‘s baby, Johnny.

He then helped Kirin to flee the country when he ran over and killed Tess Harris.

And then, crippled with debt, Rakesh burned down Mill Cottage for the insurance, leaving Nicola King with serious injuries and even began embezzling funds from the Sharmas’ business. And Priya stood by her man, the whole time.

After Rakesh got mixed up in the Whites’ dodgy dealings, Priya decided enough was enough and ran him out of the village.

Priya was the one who  revealed that Jacob Gallagher had been groomed and abused by teacher Maya Stepney, when she spotted Jacob and Maya kissing.

Along with Tracy Metcalfe and Leyla Harding, Priya took revenge on Maya and Leyla whacked her over the head with a rock.

Priya started a romance with shifty Al Chapman but she was devastated when Debbie Dingle returned to the village and revealed Al was sleeping with her, too.

The women teamed up intending to steal from Kim Tate and frame Al for the crime. But Al found out what they were planning. Debbie fled, but Priya forgave Al.

But she later slept with his son, Ellis, after Al sacked her.

After some months Priya and Ellis finally admitted they still liked each other and ended up sleeping together again – this time out of love rather than revenge.

After sleeping with Ellis, a blissfully happy Priya entered the maize maze to leave the prize for the winner.

She was then trapped when it caught ablaze. A flaming plank of wood fell on her back and left her with life-changing burns.

As Priya faces a long road to recovery, it has caused her eating disorder to rear its head.

She knows she has to eat in order to get better and that her lack of nutrients is slowing down the healing process. However, she just can’t force the food down.

Will any of her family notice and help Priya?

And will Ellis be there in her time of need – or could he have eyes for someone else now?