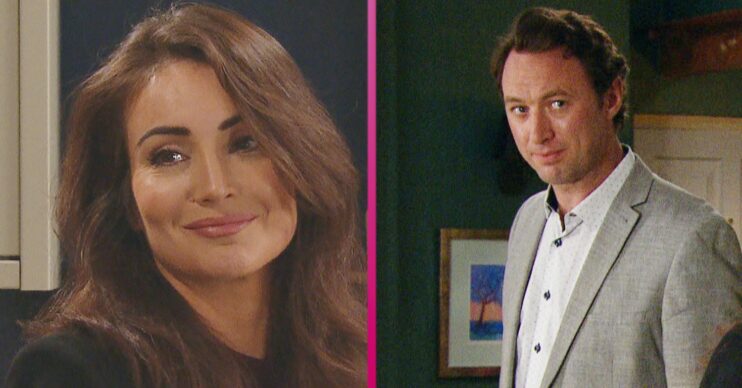 Suzy discovers Leyla is still taking cocaine and the two fall out.

But is Leyla’s husband Liam about to find out what she’s been up to?

Recently viewers found out that Suzy and Leyla have been doing cocaine together.

Suzy began working with Leyla and Priya and recently had a conversation with Moira Dingle about using her barn and a field for weddings.

Moira didn’t want to use the field as her daughter Holly, who died of a drug overdose in 2016, is buried in her field.

Seeing a photo of Holly, Suzy realised she knew Holly.

When she learnt the date Holly died, Suzy realised she gave Holly the money for the drugs that killed her.

In next week’s scenes, Leyla takes a line of cocaine before breakfast. Her jittery behaviour at home starts to catch Liam’s attention.

Later Leyla is unable to finish an interview with a journalist as she’s feeling unwell.

Suzy finds cocaine in Leyla’s bag and tells her off, explaining the dangers of buying drugs from an unknown dealer.

Suzy delivers some harsh truths to Leyla, but she just gets increasingly annoyed.

When Suzy storms out to do the interview herself, Leyla is left alone with the cocaine.

Leyla realises what she’s doing and is determined to make a change a change.

She washes the rest of the coke down the sink.

When Jacob turns up Tenant Cottage, excited and ready to talk about university, a ropey Leyla tries to act normal.

However she isn’t fooling Liam and he becomes increasingly convinced she’s suffering from PTSD.

That evening Take A Vow is buzzing with business as a queasy Leyla tries to keep up with everything going on.

Will you be watching Emmerdale next week? Leave us a comment on our Facebook page @EntertainmentDailyFix and let us know what you think!