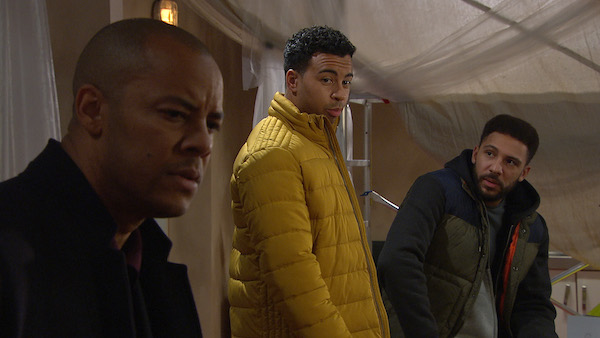 Ellis was last seen in October

Ellis will be returning to Emmerdale village in tonight’s episode of the ITV Soap (December 12 2019).

The last time viewers saw the personal trainer on screen was in October, but then the character made a sudden exit from the village in order to join his mum Jessie in Dubai for a job.

However, tonight Ellis will return, with Aaron Antony taking over the role, and it looks like there will be drama ahead…

When Ellis’s dad Al accuses Billy of not pulling his weight, the two men square up to one another.

But Ellis is quick to intervene as he arrives back from Dubai.

Meanwhile Ellis’s girlfriend Belle is annoyed that he didn’t tell her that he was coming back.

The last we saw of Ellis he was working in the outdoor pursuit centre, but Billy soon became concerned that his brother was getting too close to manipulative Al.

Ellis decided to go to Dubai to work at the same school his mum Jessie was teaching at.

In real life, the original Ellis actor, Asan N’Jie was fired from the ITV soap after getting into a fracas with Hollyoaks actor Jamie Lomas at the TV Choice Awards.

Video footage from the event appeared to show Asan being held back as he confronted Jamie in an ugly altercation that took place at 11pm.

After the altercation Asan was fired from the ITV soap.

He has since issued an apology for his behaviour saying: “My behaviour at the TV Choice Awards was completely unacceptable and very much out of character.

“I sincerely apologise to everyone who has been affected especially Jamie Lomas, the whole Emmerdale team, our audience, ITV, my family, and the organisers of the TV Choice Awards.

Last month, shortly after Ellis’s departure from the village, it was announced the character would be taken over by a different actor.

Are you looking forward to Ellis’s return?