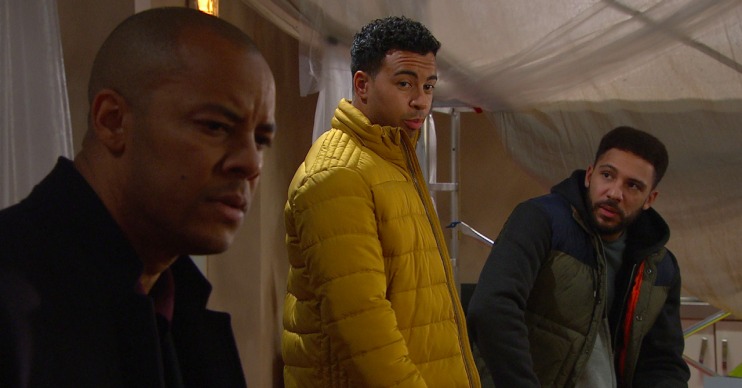 Actor Aaron Anthony has taken over the role

Emmerdale have revealed the first look at Ellis Chapman’s return.

Personal trainer Ellis left the village in September after suddenly deciding to move to Dubai to be with his mum Jessie.

Viewers know he was written out after disgraced actor Asan N’Jie threatened to ‘knife’ Hollyoaks star Jamie Lomas in a incident at the TV Choice Awards.

The character has been recast with Delicious actor Aaron Anthony taking over the role.

In new pictures Ellis can be seen arriving back in the village during a row between his brother Billy and dad Al.

He can also be seen sitting in Marlon’s house with step-sister April.

If Ellis has been recast I’m sticking with my theory that Vic’s baby is Ellis’s not Lee’s.

Ellis joined the soap last year, but fans thought he had been written out last month.

Next month, as tensions between Ellis’s dad Al and Ellis’s half-brother Billy threaten to boil over, Ellis returns to the village unannounced.

Others wondered why the character had been recast at all, comparing it to Shila Iqbal’s portrayal of Aiesha Richards.

She was immediately sacked for historic tweets and the character axed, while Ellis was brought back despite having no major storylines.

But fans are convinced he is secretly the father of Victoria’s baby – and not rapist Luke.

One wrote: “If Ellis has been recast I’m sticking with my theory that Vic’s baby is Ellis’s not Lee’s #Emmerdale.”

Another said: “Yeah he needed to be replaced as I feel he is needed for the storyline of Victoria’s baby, as I think she has her dates wrong and the baby is Ellis’s and not Lee’s #justmytake.”

A third agreed typing: “Does anyone really miss Ellis? Oh god, I bet they do a ‘dramatic’ love triangle with him, vile Victoria and her rapist brother lover and ‘shock twist!’ that it’s Ellis’ baby!!”