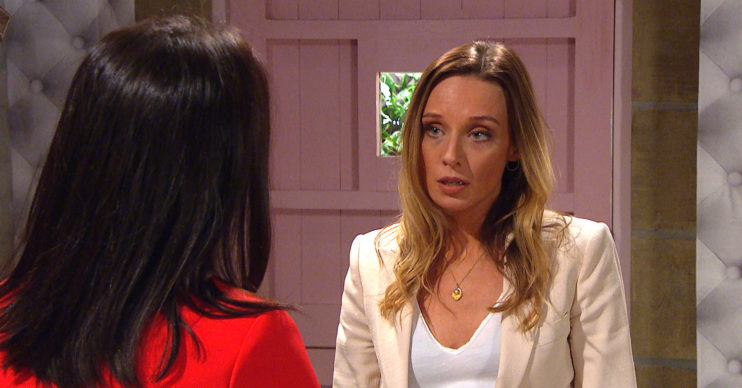 Emmerdale family Jamie and Andrea Tate return to the village next week after their holiday to repair their marriage.

But while Andrea is full of the joys of spring as she believes her husband has ended his affair with Belle Dingle, Jamie has other ideas.

Belle refuses to talk to Jamie when she sees he’s home as a result of his false promises to leave his wife.

But Jamie floors Belle with a confession that he has hired a solicitor and is about to begin divorce proceeedings.

Burned Belle opens up about her previous relationship with married Jermaine, and how badly that ended for her. But Jamie assures her this is different and he’s really serious about their future…

And when he later lies he’s spending the night at a conference, it confirms to Andrea her hubby is still playing away.

Revenge for Andrea in Emmerdale

Andrea tearfully confides in Leyla that Jamie and Belle are back on, and Leyla doesn’t mince her words. She tells Andrea to ditch Jamie and move on.

But Andrea doesn’t think she can: she still loves the rat.

However it soon seems like Leyla’s words may have had an affect as Andrea decides revenge is the best way forward.

She vows she’ll get even and recruits Leyla to help her.

What does Andrea have in mind? And how far will she go to make her cheating husband and his lover pay?

When did Andrea first discover the affair?

Andrea caught a very indiscreet Belle and Jamie out when they were at the Easter Egg hunt. They thought they were being careful hiding behind a tree and discussing their feelings, but Jamie’s wife heard everything.

She hasn’t told them she knows, instead she’s been enjoying making them suffer.

Her suggestion of a family holiday really riled Belle. Although Jamie promised he would get out of it, it wasn’t long before he was swanning off with Andrea and their daughter Millie, leaving Belle behind.

Fans have slammed Jamie for sleeping with both women at the same time, and also Belle for being the other woman after what happened with her dad, Zak, and Joanie.