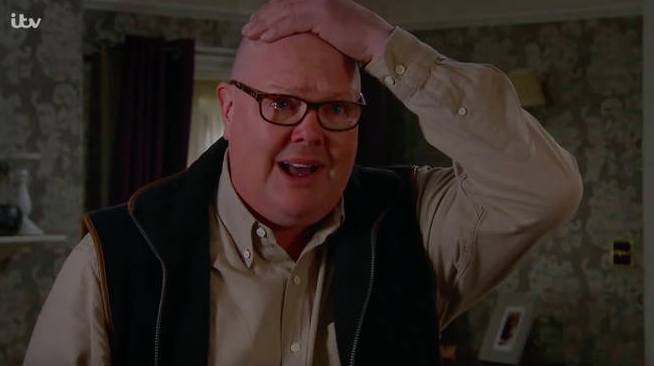 Emmerdale fans have admitted they fear the worst for Paddy Kirk and Chas Dingle‘s relationship after he ‘lost’ their daughter Eve in heart-thumping scenes.

On Thursday (March 19), Emmerdale viewers were horrified when the baby went missing in horribly unfortunate circumstances – and it was all Paddy’s fault.

New dad Paddy was looking after his precious daughter when the vet offered to take Marlon for a drive to cheer him up after his recent woes.

Please don’t let this be the end of Paddy and Chas.

But, when Marlon complained of severe chest pains, Paddy rushed his best friend to the hospital – only to forget that he had baby Eve in the back seat of the car.

By the time Paddy realised and rushed back to the car, Eve wasn’t there!

Read more: Emmerdale fans turn on Belle as she invites boyfriend Ellis to live with her

Fortunately, baby Eve was safe inside the hospital after the police received a report of an abandoned child.

Although the baby was okay, Chas was seriously unimpressed when she heard the news that her baby had been in potential danger and was being kept overnight in the hospital as a precaution.

Watching over the baby in hospital, Chas said: “Look at her. She shouldn’t be there. You left her on her own. If somebody hadn’t have seen her, then…”

Reliving the horror of losing her daughter Grace, she continued: “First Grace, and now this. When they called me I didn’t know what to think.”

Viewers then saw Paddy reach for her hand, only for her to snatch it away.

I think it'll be a long time if ever before Chas trusts Paddy with Eve.
just wait until social services turns up but they'll be able to confirm that Marlon was taken into hospital by Paddy & hopefully it won't cause trouble for Chas & Paddy.#Emmerdale

Please dont let this be the end of Paddy and Chaz

One wrote: “I think it’ll be a long time if ever before Chas trusts Paddy with Eve. Just wait until social services turn up, but they’ll be able to confirm that Marlon was taken into hospital by Paddy and hopefully it won’t cause trouble for Chas and Paddy. #Emmerdale.”

Another said: “So this looks like Paddy and Chas’ relationship could falter then #Emmerdale.”

A third added: “Can Chas ever forgive Paddy? Even if it was just a random one-off mistake? #Emmerdale.”

“This could have lasting effects on their relationship for a while anyway,” said another, while one more wrote: “Please don’t let this be the end of Paddy and Chas.”

Viewers of Emmerdale know that Paddy and Chas have already been through so much in their relationship.

The couple went to hell and back after losing their daughter, Grace, shortly after she was born due to a bilateral renal agenesis diagnosis.

In upcoming scenes, Paddy will struggle with the fact he accidentally abandoned his own daughter, and social services will get involved.

Do you think Chas will be able to forgive Paddy? Leave us a comment on our Facebook page @EntertainmentDailyFix and let us know what you think!