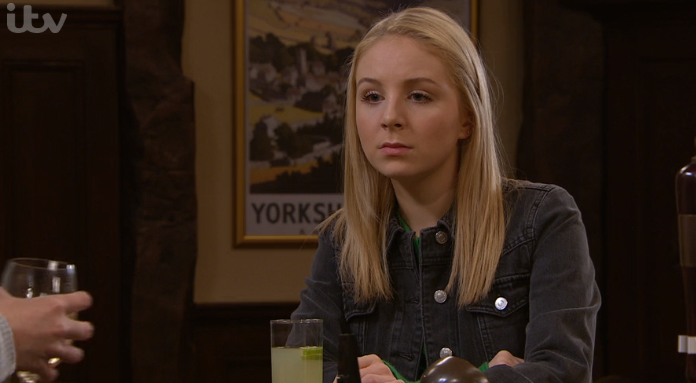 Emmerdale fans have turned on Belle Dingle after she invited her boyfriend Ellis to live with her, despite her having feelings for someone else.

Although she’s been in a relationship with Ellis since last year, back in January, Belle slept with her married friend Jamie, who was separated from his wife Andrea at the time.

The pair agreed to keep their night together a secret so it wouldn’t hurt Ellis and so it didn’t complicate things with Andrea, who was preparing to start a custody battle with Jamie for their daughter Millie.

But in last night’s episodes of Emmerdale (Thursday, March 20) Jamie and Andrea decided to show the village that they are happily back together, much to the disappointment of Belle.

Meanwhile Ellis tried to look for a place to live, after being kicked out by stepdad Marlon.

In an attempt to get Jamie and Andrea off her mind, Belle invited her boyfriend back to her house so they could spend some alone time together.

Afterwards, she ended up inviting the personal trainer to move in with her.

However, viewers were quick to turn on Belle for inviting Ellis to live with her, even though she clearly has feelings for someone else.

Oh Come on Belle! Seriously asking Ellis to move in with you! that's a recipe for disaster! #Emmerdale

Belle's asking Ellis to move in already really? They've barely even been together all that long & it's beyond obvious she still wants Jamie #Emmerdale ❤

Belle hes a married man and u have a bf u tart. Leave him alone #emmerdale

However, it looks like Belle and Jamie’s feelings for each other aren’t going anywhere soon.

Seriously asking Ellis to move in with you? That’s a recipe for disaster.

Next week, she confronts the vet about him being back with Andrea and tells him they can no longer be friends.

But he insists he only got back with Andrea out of guilt and soon the sexual tension proves too much, and they end up kissing.

Will Belle tell Ellis the truth about her feelings for Jamie? Will Jamie end things with Andrea?

Who do you think Belle should be with? Leave us a comment on our Facebook page @EntertainmentDailyFix and let us know what you think