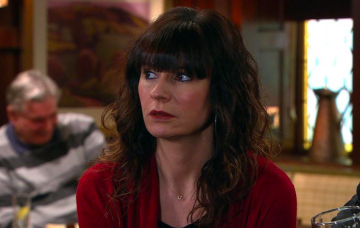 Chas Dingle made a massive impact from the first moment she arrived in Emmerdale, dressed as a nun for Marlon’s stag night!

Since then she’s had a string of disastrous romances, before finally settling down with lovely Paddy. But the most important relationship in her life is with her son, Aaron Dingle.

As the landlady of the Woolpack, Chas is at the centre of all the village drama. She’s fun, she’s feisty, but most of all she’s strong – and she’d need to be to survive everything she’s been through…

Here’s a short history of Chas’s time in Emmerdale.

How is Chas related to the the Dingles?

Chastity Dingle is the daughter of Shadrach and Faith Dingle, and the half-sister of Cain Dingle. Zak is her uncle, and Sam, Marlon and Belle Dingle are her cousins.

When Chas first arrived, she was on good terms with her dad, Shadrach, but hadn’t spoken to mum Faith in years. But she was in for a shock when she found out that Shadrach had another child, Genesis Walker!

Faith returned in 2017, wanting to make amends for abandoning Chas and Cain. They weren’t pleased to see their mum, but they eventually reconciled with her – although Faith remains a constant source of embarrassment.

Chas has a close relationship with her brother Cain and niece, Debbie, as well as Charity, who comes from a different branch of the Dingle family.

Does Chas Dingle get on with her son, Aaron Dingle?

Chas has a grown-up son, Aaron, whose father was her first husband, Gordon Livesy.

After Chas and Gordon split, she left Aaron in his care. She and Aaron didn’t speak for years, and when he eventually came to find her, they struggled to get their relationship back on track.

Aaron moved to the village when he was a teenager, and Chas was delighted to have him back. It took a while for him to forgive her, but now the two of them have a great mother-son relationship.

Chas was devastated when she found out that her ex-husband Gordon had sexually abused Aaron. She felt tremendous guilt over the fact that she had left her son with such a monster.

Chas was by Aaron’s side as he reported his dad to the police, and she supported him as he went to court to give  evidence against Gordon.

She’s also supportive of his relationship with husband Robert Sugden, and is backing their bid to become parents.

How many times has Chas Dingle been married?

Despite having a long list of love interests, Chas has only been married twice. Her first husband was Gordon Livesy, Aaron’s dad.

Her second husband was Dan Spencer. After dating a lot of inappropriate men, Chas was surprised to hear that reliable Dan fancied her. The pair went out, and Chas proposed after only a couple of dates.

They married in a joint wedding ceremony alongside Katie Sugden and Declan Macey, which formed part of the soap’s live 40th anniversary episode.

Their marriage lasted less than a year, and they split after Dan found out Chas was having an affair with Cameron Murray.

Chas was due to marry Paddy in 2018, but they called off the wedding after the tragic news that their unborn daughter Grace would not survive.

However, on the day that their wedding was meant to happen, Chas and Paddy went to a secluded area in the woods, and exchanged some romantic wedding vows.

Chas loves a bad boy, and her involvement with Carl King caused all kinds of trouble! Carl’s snooty family disapproved of him dating a Dingle, and tried to split them up.

Carl was so determined to spend his life with Chas, that he even murdered his dad, Tom King, after he caught him bad-mouthing her.

After everything they’d been through, Chas was heartbroken to find out that Carl was having an affair with Eve Jenson (played by Suzanne Shaw).

Chas proposed to Carl, lying that she was pregnant with his baby – then dumped him at the altar.

Carl never stopped loving Chas, and begged her not to marry Dan. Carl later tried to rape her – so she clocked him over the head with a brick, and thought she had killed him.

Did Chas Dingle have an affair with Cameron Murray?

Carl wasn’t the only bad boy Chas got involved with – she had a fling with murderer Cameron Murray, even though he was dating her niece Debbie.

It was Cameron who delivered the fatal blow to Carl King, but he let Chas believe she killed him – and she even went to court, charged with murder.

Chas was found not guilty, and after the trial, she and Cameron began dating properly. But Cameron couldn’t keep away from Debbie,  and cheated on Chas with her.

Chas’s sister Gennie found out, and tried to warn Chas what he was up to. However, Cameron silenced Gennie once and for all by killing her.

When Chas and Debbie found out that Cameron was a murderer, they were both devastated. He was arrested, but escaped jail – and took Chas, Debbie, and a whole host of other locals hostage in the Woolpack.

When Chas found out she was expecting a baby with Paddy, it was a huge shock. But Paddy was desperate to be a dad, and eventually the pair decided to keep their baby.

Tragedy struck when their daughter was diagnosed with bilateral renal agenesis, a condition that means the kidneys don’t develop properly in the womb.

Chas and Paddy faced an agonising decision over whether to terminate the pregnancy now, or carry on to birth, knowing that their daughter would only live a matter of hours, at the most.

They decided to continue with the pregnancy, and once their daughter Grace was born, they got to spend a few precious moments with her before she passed away.

“Are you completely stupid? Haven’t you worked it out yet, Carl?

“This whole wedding was never real. It was just a way to squeeze money out of you.

“Everything that you have paid for, the cars, the reception, the flowers, the money is all in my bank. So no, I don’t think I will marry you today. Or ever. We’re over, Carl.”

Chas’ brilliant humiliation of her cheating fiance Carl at the altar should serve as a warning to any man who tries to cross her!

What’s your favourite ever Chas Dingle moment? Leave us a comment on our Facebook Page @EntertainmentDailyFix and let us know what you think!