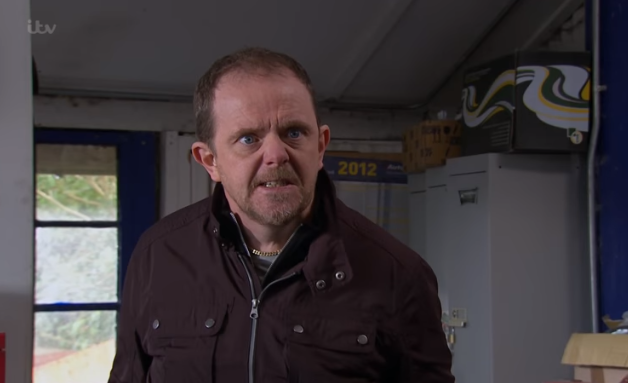 Dan has an allergy to almonds

Emmerdale’s Liam Fox, who plays Dan Spencer, has revealed his alter ego will have his life changed after a severe allergic reaction to a wrap at Brenda’s cafe.

Recently viewers saw Emmerdale‘s Dan have an allergic reaction to vegan cakes that Brenda served in her cafe. He soon realised his reaction was to the almond milk Cathy and Heath had used.

However next week Dan will have another allergic reaction when he eats a wrap that Brenda made in her cafe.

Before Dan really knows what’s happening, he is struggling to breathe as his face grows red and itchy and he starts to realise that he is in serious danger.

He’s soon found by Brenda and Pollard who take him to the hospital. However it looks like it won’t be as easy as a taking an antihistamine to make Dan better.

Speaking to ED! and other media outlets at a recent Emmerdale press day, Liam said: “He’s ill but it’s what happens because of the reaction to it that leads to a chain of events, which is going to change his life for a while.”

When asked if this would be in a bad way, Liam confirmed: “Yeah. Challenging I would say.”

“It’s something that’s really going to change his life. I can’t really say much about it at the minute. It’s to do with the after-effects of that. It’s a medical thing. Which will change his life for a while. It’s fairly long-term.”

Liam also revealed his excitement about doing a more serious storyline and how Dan’s “nearest and dearest” will also be involved in the plot.

He added: “Kerry’s still around, even though they’re not together, they’ve still got this ongoing friendship. Amelia of course, and Bob helps him out a little bit as things move forward.”

Are you looking forward to Dan’s storyline?

Next week Emmerdale airs weeknights at 7pm on ITV, with an extra episode at 8pm on Thursday.