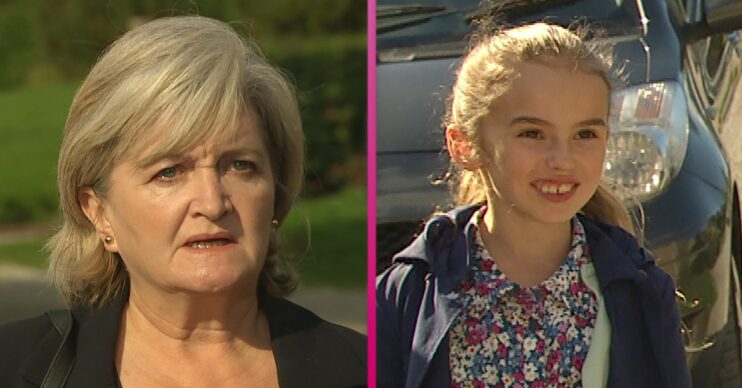 Emmerdale fans wonder where Hazel has been since Andrea’s death

It's taken her a long time to turn up

Emmerdale aired the arrival of Andrea Tate’s mum, Hazel, last night (Wednesday, November 3) and there were immediate fireworks between her and Kim Tate.

It was Andrea’s memorial following her death at the hands of Meena Jutla last month.

But no one knows Meena is to blame and instead they are taking their anger out on Kim, who was at war with Andrea over Millie.

Andrea’s mum arrived as the service was about to begin and made it very clear she didn’t like Kim or want her there. But viewers at home were more interested in exactly why Hazel has only shown up now. Especially when she dropped her huge bombshell…

What did Hazel tell Kim Tate in Emmerdale?

Hazel revealed the shock news to Kim that Andrea had named her Millie’s legal guardian in the event of death.

“I’m here to look after my daughter’s interests and stop you doing any more damage,” Hazel told Kim.

“She loved Millie and she’d want me to keep her away from you.”

Kim retorted: “And how are you going to manage that? She lives with me at Home Farm.”

“Not anymore,” Hazel replied, before adding: “Andrea made sure I’ve got the trump card. Before she died, she named me as Millie’s legal guardian.”

Kim protested she loved Millie, but Hazel coldly told her: “When this memorial’s over I’ll be taking Millie home with me and there’s not a thing you can do about it.”

What are fans saying about Hazel in Emmerdale?

Despite Hazel’s huge revelation, viewers at home were for once in agreement with Kim Tate!

After she commented that Hazel hadn’t bothered to show up before now, fans were quick to express their feelings on the matter.

On Twitter, one wrote: “Kim’s got a point. Why has it taken Hazel this long to come to the village to support Andrea when she’s now dead?”

A second agreed: “Why exactly did it take a phone call from Charles for Andrea’s mum to arrive? Was she not concerned for Millie before now?”

Kim’s got a point why has it taken Hazel this long to come to the village to support Andrea when she’s now dead ? 🤔😬 #Emmerdale

Why exactly did it take a phone call from Charles for Andrea’s mum to arrive? Was she not concerned for Millie before now? #Emmerdale

Meanwhile, over on DigitalSpy forums one wrote: “So despite being named as Millie’s legal guardian in the event of Andrea’s death, it has taken Auntie Pam two weeks to turn up to claim her?”

Another added: “No one thought to check who Millie’s guardian was after both her parents died?”

Why has Hazel stayed away so long?

Hazel tried to defend herself by saying: “I wanted her to come home but she didn’t trust what you and Jamie would be up to behind her back if she left.”

But whether that’s good enough for viewers remains to be seen.

Kim is forced to agree to what her granddaughter wants and packs the last of her things up.

A devastated Kim realises Jamie has gone – and she’s lost Millie too. Can she get through this? Who will she turn to? And is this really the last we’ll see of Millie?