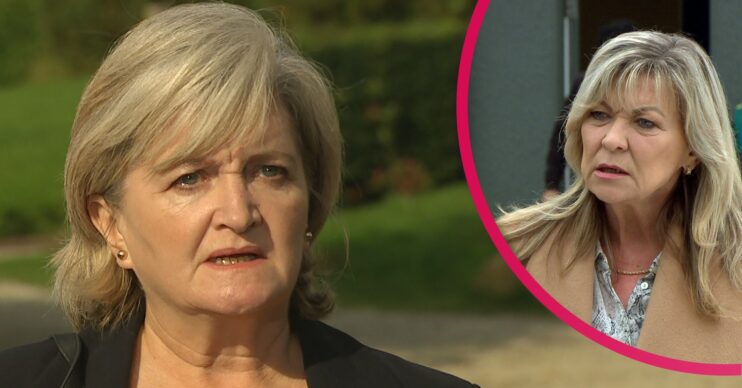 Who plays Hazel in Emmerdale? What else has Kate Anthony been in?

Actress has starred in Coronation Street, amongst others

Emmerdale character Hazel arrived in the village last year for Andrea’s memorial, but eagle-eyed fans will know actress Kate Anthony from another soap.

Hazel is the late Andrea Tate‘s mum and she turned up in the village for her daughter’s memorial after she was murdered by Meena Jutla.

Actress Kate Anthony, who plays Hazel, is no stranger to Soapland, having appeared in Coronation Street on and off for four years.

Who did Kate Anthony play in Coronation Street?

Kate took on the role of Pam Hobsworth on the cobbles appearing in 128 episodes between 2008 and 2012.

She was the aunt of Molly Dobbs and well-known for her money-making scams. She helped Molly and Tyrone get together and get married.

However, she was disappointed when she discovered her niece was having an affair with Kevin Webster. When Molly died in the tram crash in 2010, distraught Pam blamed Kev for her death.

Pam’s hatred of Kev caused trouble between her and Bill, especially when she said she wouldn’t have him at their wedding. In the end, they never actually married and separated off-screen.

Pam is great aunty to Kev’s son Jack, whose mum is Molly, and despite her differences with Kev, sometimes Jack will go and stay with her.

What else has Kate Anthony been in?

Kate has also appeared in Doctors and Casualty on numerous occasions playing various different roles, as well as Holby City and Moving On.

She had a small role in Game Of Thrones and has even played a doctor in EastEnders before.

Heartbeat, The Bill, Citizen Khan, Boomers and Trollied are among the other titles she has to her name.

Why did Hazel go to Emmerdale?

Andrea Tate was murdered last year at the hands of Meena Jutla. Hazel arrived in the village for the memorial service for her daughter planned by Kim.

But Kim didn’t do it out of the goodness of her heart and hoped son Jamie would come out of hiding.

Kim was sure Jamie has faked his own death and just needed an excuse to come back.

Jamie didn’t come back however and Kim accepted he was gone.

However Hazel turned up and Jamie and Andrea’s daughter Millie made the decision to go and live with her.

When Millie got back to Hazel’s, it was revealed Jamie was alive and he had been working with Hazel to get Millie back.

Why is Hazel working with Jamie?

After it was revealed Jamie and Hazel were working together, Emmerdale fans were confused as Jamie put Andrea through a lot when she was alive.

They questioned why Hazel would team up with Jamie after how he treated her daughter.

Why would Andrea's mum want Jamie anywhere near Millie after the way he treated her daughter? I don't understand #emmerdale

surprise surprise Jamie's alive, but what surprised me is that he plotted with Andrea's mum to get Millie.
I wonder what sob story he told Hazel.
🤔I can see Jamie not taking any responsibility & telling Hazel that everything he did & the way he acted was Kim's fault.#Emmerdale

But then again it did take her two weeks since Andrea’s death for her to come to the village, so perhaps she didn’t care about her daughter all that much!