Emmerdale viewers were 'heaving' last night when Moira Dingle and Nate Robinson gave in to their passions yet again and ended up having sex.

On Wednesday (September 11), married Moira cheated on husband Cain Dingle once more when she and farmhand Nate got intimate in his caravan. 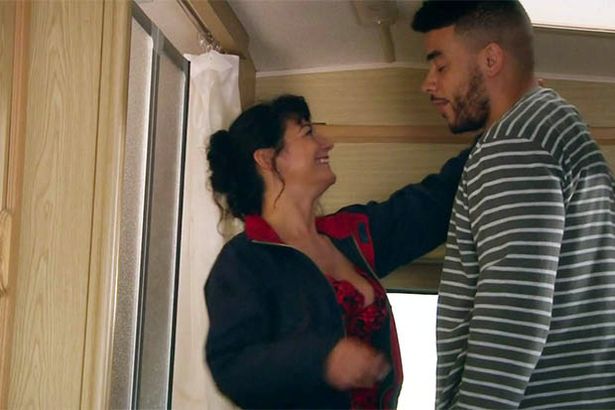 Moira flashed her lacy bra in scenes of a sexual nature (Credit: ITV)

Like giggling teenagers in the first flush of love, Moira teased she would show Nate "who was boss" before stripping off her overalls and revealing her lacy red and black bra.

When Pete Barton disturbed them by knocking on Nate's door, viewers were relieved the saucy stuff had been postponed.

Moira and Nate wants to make me puke.

Emmerdale viewers watching from home slammed the scenes for being "cringe", "sickening" and "gratuitous".

One tweeted: "Moira and Nate want to make me puke #Emmerdale."

Don't care about Victoria's little wobbles. She chose to keep the baby...she is financially responsible for it! No one else!!#emmerdale has ruined both of their characters!! #robron#victoria_worst_sister_ever

Moira and Nate wants to make me puke #Emmerdale

I have definitely not missed this Nate and Moira bull

Think i might start recording @emmerdale so i can fast forward the Nate and Moira bits..... uch y fi!! Not sure why you have done this storyline knowing how loved #COIRA IS!! Writers have a word with yourselves! #emmerdale

It's just after 7pm and Moira is STILL obsessed with sexual encounters. These scenes with Nasty Nate ought to carry a health warning. Even the farm animals are covering their faces #Emmerdale

Pete is my favourite character of the day for interrupting Nate & Moira! 🙏😂#Emmerdale pic.twitter.com/f4TEQnZco0

Another cried: "Nate and Moira are sooo gross!! Still muting these scenes."

A third added: "It's just after 7pm and Moira is STILL obsessed with sexual encounters. These scenes with Nasty Nate ought to carry a health warning. Even the farm animals are covering their faces #Emmerdale."

Many others said they fast-forwarded through the scenes.

Writing on Digital Spy Forums, one viewers said: "Watching Moira and Nate tonight made me heave."

Several others called the scenes "gratuitous".

Moira and Nate can't keep their hands off each other (Credit: ITV)

Moira and Nate embarked on an affair in July, after weeks of lingering looks and flirting behind Cain's back.

Although Moira did try to cool their relationship, her resolve didn't last long as she ended up giving in to temptation yet again.

It's only a matter of time before they are caught out, though, and Cain isn't a very forgiving bloke...

Viewers suspect there's more to Nate than meets the eye, too. Is he really who he says he is?

Do you find the Moira and Nate affair believable? Leave us a comment on our Facebook page @EntertainmentDailyFix and let us know what you think!