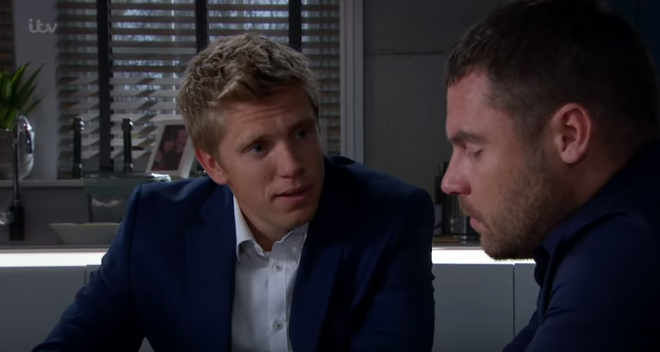 He leaves next week...

Viewers of Emmerdale have criticised the ITV soap for not giving ‘legacy character’ Robert Sugden a fitting send off.

Actor Ryan Hawley will bow out from his role as Robert next week, after five years in the Dales.

Emmerdale’s famous October Week will see Robert and Aaron go on the run, as well as Moira and Nate’s affair revealed.

But angry fans have claimed that mucky Moira and nasty Nate’s storyline has been dominating the soap of late – leaving little room for Robert.

Writing on Digital Spy Forums, one said: “Ryan Hawley is leaving, but Robron have spent months off screen or playing second fiddle to Victoria whose story isn’t even being played much.”

They continued: “I also think it goes to show how out of touch the current producers are with what the fans want. You have one of the show’s biggest stars leaving, yet they aren’t being played heavily in story.

“Given how big a part Robert and Robron have played in the show the last few years, they should be giving Robert a huge exit story but instead we are forced to watch Moira and Nate break up then hop back into bed, Kerry, Amy, Vanessa and Tracy screeching so loud they are making dogs whine and some random old man getting salmonella.”

Another agreed, saying: “The problem of late is that a show obsessed with cheating and affairs hasn’t had a clue what to do with a solid monogamous relationship.”

Over on Twitter, one angry viewer said: “Seriously?! We’ve got limited time left to see Robron on our screens and instead we have to endure Nate and Moira #Emmerdale.”

Another said: “Robert has so little time left but Emmerdale thinks showing Nate and Moira doing the same thing over and over again is more important.”

A third typed: “Absolute JOKE. We are about to lose Robron the most amazing, phenomenal couple Emmerdale has ever had and all the screen time goes to Nate and Moira who no one cares about. We haven’t seen Robron for weeks and tonight was pathetic!”

No biggy, Robert might go down for life but no biggy emmerdale, I obviously just want to watch the same scene of Nate and Moira ten times over in the same episode…. #Emmerdale #robron

This Moira and Nate overload is not doing Emmerdale any favours. We should be seeing more of Aaron and Robert with Robert leaving soon. #Emmerdale

They say less is more well can we have less Nate & Moria and Amy & Kerry and a hell of a lot more #Robron, the boys should be the lead story in every episode until Robert is gone instead they are treated like the C plot it's awful & difficult to understand frankly #Emmerdale 💔😒

Seriously?! We’ve got limited time left to see Robron on our screens and instead we have to endure Nate & Moira #Emmerdale pic.twitter.com/cJIOM0hb6B

“This Moira and Nate overload is not doing Emmerdale any favours,” said one more. “We should be seeing more of Aaron and Robert with Robert leaving soon. #Emmerdale.”

Lee was left in a coma after the attack and, after awakening, made sure Robert was charged.

Already facing a long spell in jail for grievous bodily harm with intent, Robert soon discovers the horrifying news that Lee has died.

He and husband Aaron attempt to flee the Dales to escape prison but, with actor Danny Miller NOT leaving the soap, it’s clear things don’t go to plan…

Do you think Moira and Nate get too much screen time? Leave us a comment on our Facebook page @EntertainmentDailyFix and let us know what you think!