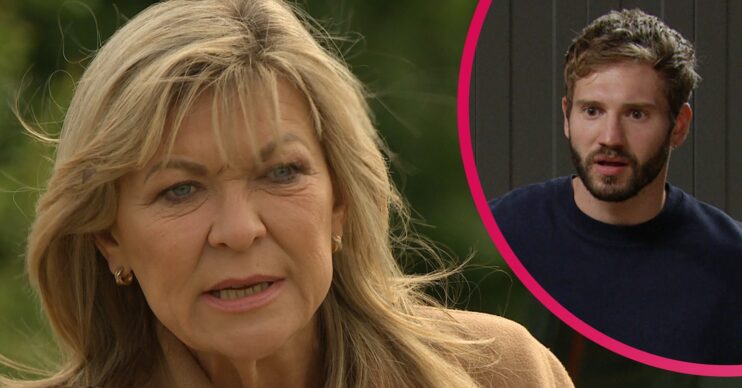 The Home Farm matriarch doesn't seem too bothered by his 'death'

Emmerdale fans are convinced Kim Tate knows more than she’s letting on about what happened to her son Jamie.

In Tuesday night’s episode (29 September 2021), the police told Kim they were calling off the search for Jamie.

Jamie has been missing, presumed dead since he crashed his car into a lake after swerving to avoid Chas, who was driving the other way.

Fans are already convinced he’s faked his own death to get away from Gabby, who is pregnant with his child and wanted to marry him. But did his mum help him do it?

Has Kim helped Jamie fake his own death in Emmerdale?

When the cops called to inform Kim they were calling off the search for Jamie, her reaction wasn’t exactly that of a greiving mother.

Rather than be angry and demand they keep looking until they find out what happened to her son, Kim merely accepted their decision and put the phone down.

Gabby was fuming, insisting Kim call back and tell them to do more. When Kim wouldn’t, Gabby took matters into her own hands and rang them herself.

Kim wasn’t impressed that Gabby had done that and told her she needed to let it drop. But surely Kim would want to know what happened to her beloved only child?

Unless, of course, she already knows…

Viewers are convinced Kim would be distraught and screaming the odds about this.

They reckon she knows exactly what happened to Jamie because she helped him do it or he’s been in touch since the accident to let her know he’s safe and hiding out.

Kim went from denial to acceptance in a heartbeat about Jamie’s ‘death’ l don’t buy it. #Emmerdale

Wonder if Kim ordered Jamie to fake his death so Gabby couldn’t claim any money?! #Emmerdale

Kim’s very calm for someone who’s sons allegedly died,does she know he is alive and well I wonder #Emmerdale

Why do I think Kim has helped Jammie disappear? To stop him and Gobby getting hitched #Emmerdale

Jamie and Kim planned this #emmerdale

Others just thought Kim is heartless and it’s actually very in character!

When they made Kim Tate they forgot to give her a heart !! #Emmerdale pic.twitter.com/di4WW2C6uK

Seems very weird how on Monday Kim seemed very quick to point the finger at Chas. Then where as tonight is concerned it seems like she’s given up on Jamie she’s convinced he’s dead and suddenly dosnt care. That didn’t shock me at all. Kim’s never cared about Jamie #Emmerdale

Will Jamie be found alive?

Read more: What happened to Emmerdale’s Jamie? Five theories about his ‘death’

With the search called off and no sight nor sound of Jamie, just where is he?

The lake he crashed into wasn’t exactly big – if he didn’t get out, surely they’d have found his body by now?

So does that mean he’s hiding out, ready to come back with a bang?

Could he be preparing to return as Gabby gives birth to his baby to steal it?

Or does he have revenge on his mother in mind instead?