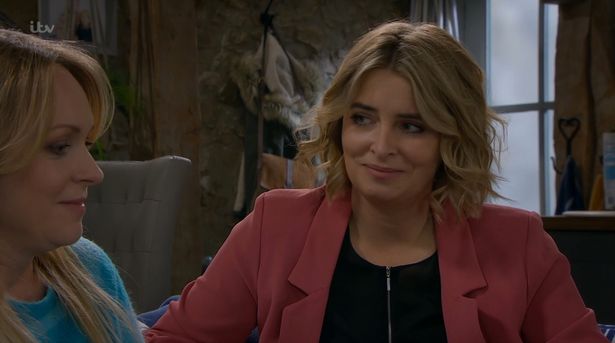 Charity's got a foul mouth on her

Landlady Charity went into a spiral after she bought Vanessa an expensive tablet computer for her birthday present and planned a low key day of celebrations.

But as Vanessa is struggling with her bowel cancer diagnosis and the disease spreading she was more reserved than normal.

And as Charity ranted about her own mistakes, fans were convinced she had sworn at Vanessa and couldn’t believe their own ears.

A second said: “Did she say that she [expletive] it up?”

A third responded: “That’s what I thought, too.”

A fourth said: “Even though I know very well that Charity says to Vanessa ‘I sucked it up; at the beginning of tonight’s #Emmerdale, I’ve played it back a few times now and every single time I clearly hear ‘I [expletive] it up’ which I’m absolutely living for.”

However after careful listening ED! can confirm that Charity didn’t swear at all, and there was no f-bomb dropped.

She actually said: “When you said no birthday party I listened. Then you said you had to work till lunchtime even though I took day the off and I sucked it up.”

Phew! The couple could do without any unnecessary drama in their lives as Vanessa saves her strength for her upcoming battle, though next week Charity betrays Vanessa as she struggles to cope on her own.

When Charity walks in on the surprise party that Tracy Metcalfe (Amy Walsh) has organised for Vanessa, she panics knowing that it’s not what Vanessa needs right now or can cope with, especially as her diagnosis is still a secret.

Charity forces Tracy to go outside with her and tries to tell her that the party isn’t a good idea, but Tracy refuses to abandon the plans confused about what the issue is – and then Charity blurts out about the cancer leaving Tracy floored.

Vanessa doesn’t take this well but she’s soon opening up to her sister instead of Charity, putting more pressure on their relationship.

Do you think Vanity can survive Vanessa’s illness? Leave us a comment on our Facebook page @EntertainmentDailyFix and let us know what you think!