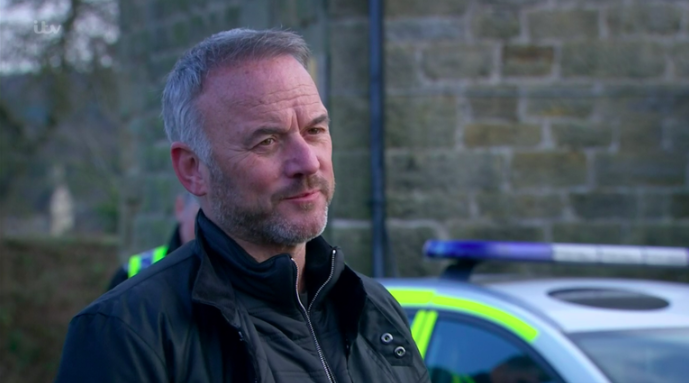 Not a fair cop, at all

Viewers of Emmerdale have started to ask some serious questions about the Hotten police force’s honourablity.

Fans of the soap raised the alarm after yet another corrupt cop arrived in the village with sinister intentions.

On Thursday night (March 5), soap fans saw a new storyline kick off when DI Malone arrived in the village in the aftermath of Nate Robinson’s non-fatal shooting.

Mark Womack joined the cast as the Detective Inspector, who came to interview Cain Dingle and Will Taylor about the incident.

And it became immediately obvious that he’s as bent as they come – and full of menace, too.

Called in to investigate the shooting at Butler’s Farm, Malone and his team began an extensive search for the weapon that was used against Nate.

The handgun behind the attack was not only unmarked but viewers know it has a very dodgy history behind it.

Harriet had asked Cain to get rid of the gun, due to its links to Will’s criminal past.

Of course, Cain made well sure the gun had been disposed of, after storing it in a car on its way to be crushed.

In fact, it later became clear that the gun belonged to bent policeman Malone, who appeared to have had some twisted alliance with criminal Will.

A spokesperson for Emmerdale teased Mark’s character is “a police officer with a dark history”.

The Liverpool-born actor, best known for his roles in Murphy’s Law, Merseybeat, Vera and Babylon, said: “It’s always a lot of fun to play the bad guy and Malone definitely falls into that category.

The soap also warned that Malone’s appearance would cause “explosions”.

Some of those watching from home couldn’t believe yet another dodgy copper had landed in the village.

One wrote: “Here’s the next crooked cop in Emmerdale. It’s not as if the crooked cop scenario hasn’t been done to death by every single soap many, many, many times.”

Another added: “And here’s another gangster cop. As if we haven’t had enough of [bleep] annoying gangster characters already and would just prefer some actual drama #Emmerdale.”

This is dire again tonight x

Just what we want, another bent copper 😫 #emmerdale

A third fumed: “Now we have yet another bent copper who will throw his weight around. Give us something original please.”

“Just what we want, another bent copper,” said one more frustrated fan, with another adding: “You really would think those in charge would at least try to come up with an original idea but, oh no, they just bring in another dirty police [bleep].”

Some of those viewers who work in the police force slammed the show for making the police “either bent or stupid”, giving the force a bad name.

However a few saw the funny side, and called for Line of Duty’s DI Hastings in AC-12 to investigate!

Of course, Charity was groomed, raped and terrorised by corrupt cop DI Bails in disturbing scenes in 2018.

Do you think there are too many bent coppers in Emmerdale? Leave us a comment on our Facebook page @EntertainmentDailyFix and let us know what you think!