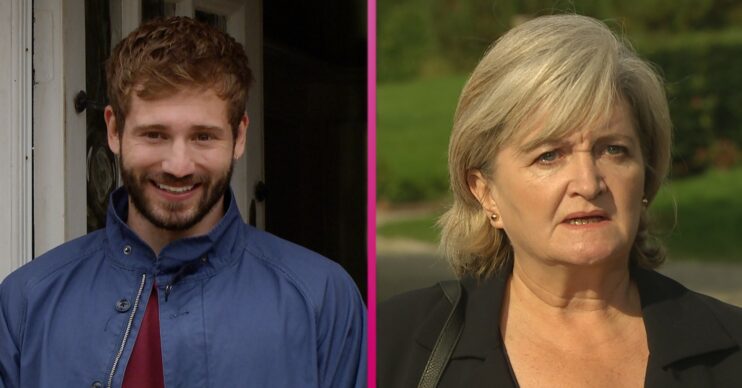 Emmerdale fans confused by Hazel and Jamie teaming up

Andrea's mum and her ex-husband have been in cahoots

Emmerdale dropped the huge bombshell that Jamie Tate is alive last night and not only that, but he’s been working with Andrea’s mum, Hazel, to get Millie away from Kim.

Fans had long been sure Jamie hadn’t died when he drove his car into a lake and the vehicle was recovered, but not his body.

Jamie’s mum, Kim Tate, also suspected something was amiss and was convinced her son hadn’t perished. She believed he had faked his own death to punish her – and it looks like she was right.

Is Jamie Tate dead in Emmerdale?

Hazel turned up at Andrea’s memorial on Thursday night (November 4) and told Kim that Andrea left her full custody of Millie before she died. Devastated Kim was forced to hand over the little girl when Millie expressed her wish to live with Granny Hazel.

With Jamie not turning up to Andrea’s memorial as Kim had hoped, she decided to accept her son really was dead. Distraught Kim lost everything.

But Jamie was exposed as fit and well and staying at Andrea’s mum’s house.

Whether he’s been there all this time or whether he turned up when he discovered Andrea had died was not explained. But the fact remains, he isn’t dead and he finally has custody of his daughter.

Why is Hazel working with Jamie in Emmerdale?

Most viewers were pleased to see they had been correct predicting Jamie was alive, but many were confused over how – and why – he’s ended up working with Hazel.

After everything he put Andrea through, why would Hazel even give him the time of day?

Writing on Twitter, one said: “Surely Andrea’s mam knows what a [Bleep] Jamie’s been to Andrea. And Andrea must have been alive before they planned to take Millie?”

What else did fans say?

Why would Andrea’s mum want Jamie anywhere near Millie after the way he treated her daughter? I don’t understand #emmerdale

surprise surprise Jamie’s alive, but what surprised me is that he plotted with Andrea’s mum to get Millie.
I wonder what sob story he told Hazel.
🤔I can see Jamie not taking any responsibility & telling Hazel that everything he did & the way he acted was Kim’s fault.#Emmerdale

I would have thought Andrea’s mother would want nothing to do with Kim, Jamie and Charles #Emmerdale @emmerdale

OMG Andrea’s Mom has been secretly working with Jamie this whole time really? Andrea can’t of known he was still alive though surely? Jamie obviously isn’t anywhere near smart enough to pull this off just him & Hazel right?

But then again, as some pointed out yesterday, it took Hazel two weeks since Andrea’s death to turn up at all, so perhaps she didn’t care about her daughter all that much!

What did Jamie do to Andrea?

Jamie wasn’t exactly an exemplary husband to Andrea. To be fair, before they came to the Dales they supposedly had a pretty happy marriage, but once Kim got involved, that all changed.

Jamie cheated on Andrea with Belle Dingle. Then Andrea blackmailed him into staying with her.

Things turned really sour when it was revealed Jamie might not be Millie’s dad after Andrea’s one-night stand with Graham Foster was revealed.

However, even though a DNA test confirmed Millie was a Tate, it was the final nail in the coffin for Jamie and Andrea and they split.

It wasn’t a nice break and Jamie eventually signed all of his rights away to Millie.

So exactly why Hazel has chosen to help Jamie after all he did to her daughter is a bit of a mystery!

Is Jamie Tate returning to Emmerdale?

Read more: Emmerdale new romance with Will and Bernice?

As Hazel returned with Millie, Jamie told her he was finally free.

“I never have to set foot in that hell hole of a house again, she can stay in there and rot all on her own,” he said.

And in fact, Emmerdale has confirmed there are no plans for Jamie to return to the show.

But with him at large, and Kim sure not to give up on Millie, we aren’t convinced this will be the last we see of Jamie…