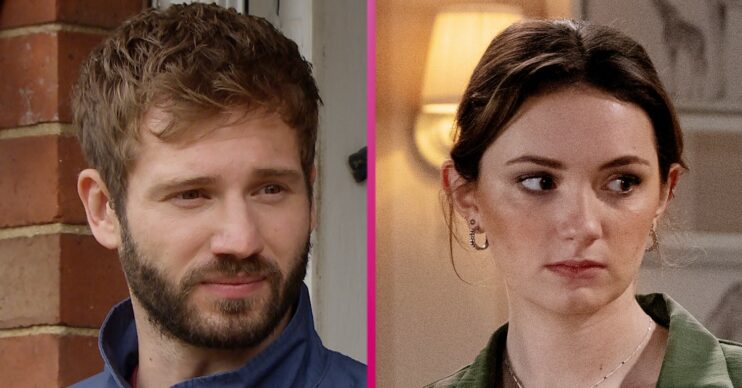 Gabby found out Jamie is alive

Emmerdale’s Gabby Thomas is determined to keep Jamie out of her and Thomas’ lives.

After overhearing Millie give Thomas a message from their dad Jamie, who Gabby believed to be dead, she suspected he could be alive.

After some digging she found evidence he is alive, but doesn’t want him back in her life. Does this mean Jamie will never return to Emmerdale?

Last year, Jamie faked his death after he accidentally drove his car into a lake.

A few weeks later, Jamie’s ex-wife Andrea and mother of his daughter, Millie, was murdered by Meena Jutla.

Andrea’s mother Hazel came to the village to attend her memorial and bring Millie back with her.

While Gabby, Kim and the rest of the village believed him to be dead, it was revealed to viewers Jamie is still alive after Hazel brought Millie home and Jamie was there.

In last night’s episode (Thursday, April 7) Hazel and Millie came to the village for Thomas’ christening and Millie was under strict instructions not to talk about her dad.

However Gabby overheard Millie on the baby monitor talking to Thomas saying that their dad wants to see him soon.

Gabby told Dawn she suspects Jamie is alive and was determined to find out the truth.

In tonight’s episode (Friday, April 8) Gabby and Dawn went over to Hazel’s to see if they could find Jamie but no one was there.

They got into the house and found Jamie’s watch from his mum and Millie, leaving Gabby convinced he was alive.

However when they got back to Home Farm Gabby was determined to keep the fact that Jamie was alive from Kim, not wanting him to come back and try and take Thomas away.

Dawn agreed to keep it between them, but does that mean Jamie isn’t coming back?

Is Jamie coming back?

In a interview earlier this year, producer Laura Shaw hinted Jamie could come back.

She told Entertainment Daily and other media: “Up at Home Farm, we know that Jamie Tate is actually still alive of course. So obviously that information is still to come out.

Although Jamie could return, actor Alexander Lincoln has been busy filming an independent feature film called In From The Inside.

Will he ever come back?

Did you watch last night’s Emmerdale? Leave us a comment on our Facebook page @EntertainmentDailyFix and let us know what you think!