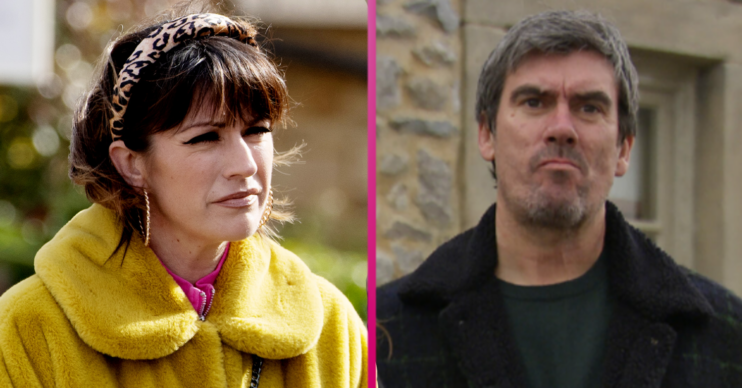 All hell breaks loose when Cain lets slip to Kerry what Al's been up to...

A shock kiss causes big trouble for Emmerdale’s Cain and Kerry next week.

However, it’s not this pair who are puckering up.

It’s Kerry’s fella Al who’s the one getting some mouth-to-mouth action after he shares a kiss with his ex, Priya.

But when Cain stirs the pot by telling Kerry what’s going on, all hell soon breaks loose.

The drama begins when Al is listening to Priya as she opens up about her injuries in the fire and how she feels about herself.

The closeness between the pair oversteps the mark, however, and they end up kissing.

Both Priya and Al regret their actions, and agree it was a mistake. But they don’t realise that their conversation is overheard.

With no love lost between Cain and Al, he’s delighted to have a juicy bit of gossip on his enemy. He wastes no time in letting Kerry know what he saw.

Kerry is already on edge as she’s become suspicious of Al’s relationship with his new business partner Belle.

Soon, she accuses them of getting up to funny business just when they’re in a meeting with an important client.

Emmerdale: Cain drops Al in it with Kerry

Later, Al and Belle manage to salvage the meeting – well, until Cain drops the bombshell about Al and Priya that is.

Soon, Kerry’s on the warpath again, and chucks a pint over Al.

Belle’s devastated when the client decides they’ve had enough and backs out of the deal.

Al quickly realises who told Kerry about the kiss, and vows revenge on Cain. The battle lines are drawn between the two men once again.

With his new business and his love life both in tatters, what will Al’s next move be?

Should Kerry take back Al?  Leave us your thoughts on our Facebook page @EntertainmentDailyFix and let us know what you think!