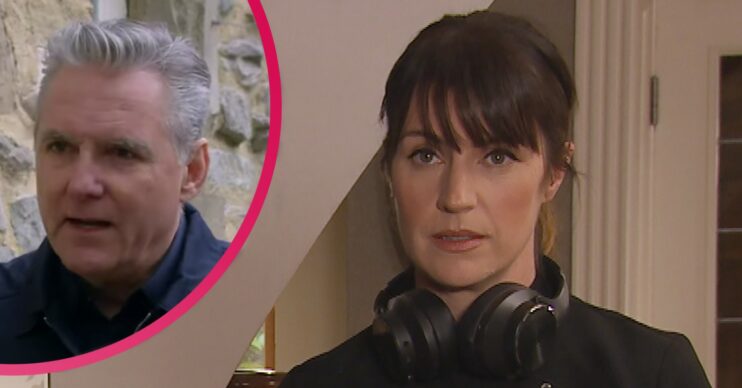 In 2019, Kerry and her daughter Amy Wyatt inadvertedly started a fire at Sharma & Sharma chocolate factory after destroying the factory’s CCTV system to cover up the fact Kerry stole charity money from the safe.

A fire broke out and Frank went into the factory to clear out his locker, as Jai suspected him of stealing the charity money.

When inside, Frank realised his daughter Tracy was trapped inside a cupboard and tried to get her out.

Eventually they both got out of the building, but Frank was stood near to the factor door when an explosion went off.

Frank was thrown against a van and died from his injuries.

Read more: 5 plots the soaps NEED to tackle in 2022 from the menopause to animal cruelty

Eventually Frank’s daughters Tracy and Vanessa found out about Amy and Kerry starting the fire, but chose to stay quiet as Kerry was the closest thing Amelia had to a mum.

However villagers were left believing Frank started the fire to get revenge on Jai.

Last year Kerry left the village, but in last night’s episode (Monday, November 1) Charity was shocked when she broke into Chloe Harris’s house only to find Kerry worked there as a cleaner.

However fans are hoping now Kerry is back on screen, she will face justice.

#emmerdale Why have they brought Kerry back? Is she finally going to pay for Frank's murder?

Emmerdale: What’s next for Kerry?

Kerry is alarmed when she receives a message from Chloe’s dad saying one of his watches has gone missing.

Is she finally going to pay for Frank’s murder?

Soon in the village a mysterious figure is watching from a parked car.

Who is watching Charity and Mackenzie? Have they just invited trouble into their lives?