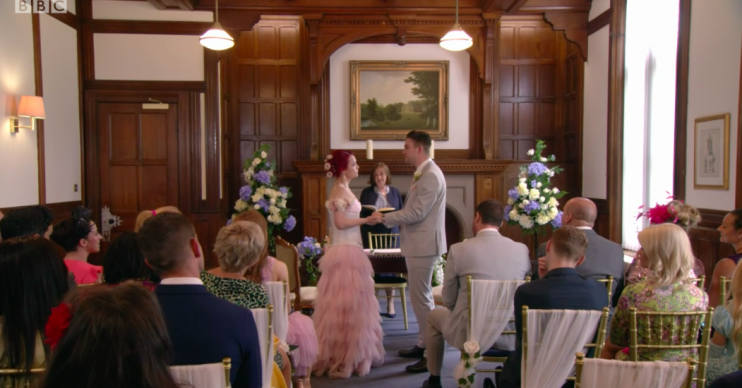 EastEnders viewers heartbroken as Whitney jilts Callum at the altar

She couldn't go through with it after all

EastEnders finally revealed the outcome of Whitney Dean and Callum Highway’s wedding – and it wasn’t a happy ever after.

After discovering her fiancé had cheated on her with Ben Mitchell, Whitney came to the difficult decision that she couldn’t marry him even though she loved him.

In heartbreaking scenes shown on Tuesday night (September 3), Whitney’s fairytale wedding fell apart when she did a total u-turn and realised she couldn’t marry a man who had doubts about his sexuality.

After Callum said his vows, Whitney began hers, saying: “I love you. You are more gentle than I knew a man could be.

“You listen to my dreams, and you help me map them. When I’m with you, I feel safe. And I know that whatever happens, whatever I do, you’re loyal.”

But turning away from him, and fighting back tears, she then told Callum she was sorry, before she ran out of the venue and into the waiting limo.

A shocked Callum followed, but it was too late to salvage the tatters of their relationship.

At home later, the pair had a heart to heart in which Callum begged her to give him another chance – but she, in turn, asked if he was in love with Ben.

She also reminded Callum about the letters he had kept from his ex-army pal Chris, now deceased, who had been in love with him.

In gutting scenes, she realised Callum was gay and told him she couldn’t force him to be someone he wasn’t.

She said she loved him too much to let him carry on living a lie.

Fans were in tears over the scenes, after which Callum sought refuge with his brother and Whitney was left alone and sobbing on what should have been her marital bed.

One viewer tweeted: “Brilliant episode tonight. My heart broke for Whitney. She was so selfless. Brilliant performances by @ShonaBM and @tony_clay76 #EastEnders.”

Another said: “The scenes between Callum and Whitney today were so heartbreaking and so extremely well acted. I am in awe of how supportive Whit is being, the scenes made me so emotional.”

A third added: “Absolutely loving Whitney in EastEnders. I feel so sad for her as she didn’t marry her Prince Charming.”

Absolutely loving Whitney in Eastenders. I feel so sad for her as she didn’t marry her Prince Charming. The dress was insane. ♥️♥️ @ShonaBM

“Such a sad storyline, and not the ending I wanted, but I think Whitney did the right thing,” said one more.

Lots of fans now hope that Callum and Ben will get together and finally become Ballum… But maybe let the wounds heal a bit first, no?

EastEnders viewers will have to wait until Thursday night (September 5) to watch the fallout from the non-wedding, which will almost definitely be overshadowed by Hunter Owen’s murderous rampage in The Queen Vic.

Do you think Whitney did the right thing? Leave us a comment on our Facebook page @EntertainmentDailyFix and let us know what you think!