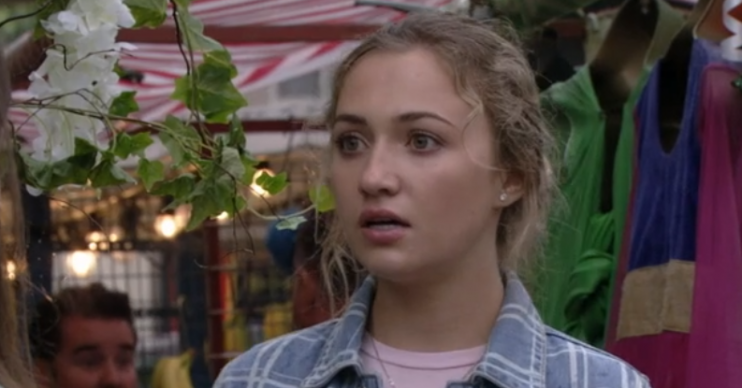 Tragedy at The Vic shooting?

Viewers of EastEnders are convinced Louise Mitchell will lose her unborn baby in The Queen Vic shooting.

However, viewers think that Louise will end up losing her baby in The Queen Vic shooting.

On Monday (September 2 2019), EastEnders shared a 20-second clip of what is to come in this week’s episodes.

In the clip Hunter can be seen in the Vic’s cellar walking towards Linda and as Jack asks what’s going on, Mel tells him Hunter is in there.

Mick can be seen walking through the crowded pub with Hunter following behind before Keegan shouts “he’s got a gun!”

People in the pub start to panic and Louise can be seen stood with Bex.

It then cuts to a clip of Phil saying “calm down? My daughter’s in there” to a police officer.

Lisa is then seen running out of the Vic, then it shows a clip of Keanu running towards the pub doors before showing Sharon screaming “No!”

Then as “family means everything” comes up on the screen, a scream sounding very much like Louise can be heard.

Viewers think that Louise will end up being shot and lose her baby.

Bosses of the BBC soap recently announced that at least one Walford resident won’t survive next week as Hunter Owen’s plan for revenge on Jack Branning sees him arrive in The Queen Vic with a gun.

However, official spoilers for the following week have confirmed 12 Albert Square residents who will survive the ordeal.

EastEnders fans know that Louise isn’t the only one carrying Keanu’s baby.

Her stepmother Sharon is also carrying his baby.

Sharon had an affair with Arches worker, Keanu Taylor.

Although they ended their affair and he went on to start a relationship with her stepdaughter Louise, Sharon and Keanu ended up sleeping together yet again when Louise broke up with him.

Louise and Keanu ended up getting back together as she told him she didn’t actually abort their baby.

But at the same time Sharon found out she was pregnant!

Sharon later had a pre-natal DNA test and it proved the baby isn’t her husband Phil’s.