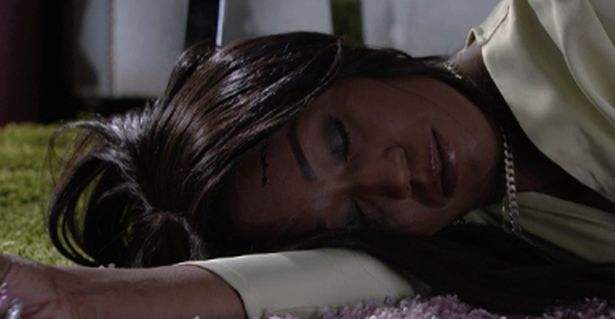 EastEnders fans were furious with Hunter Owen last night, when the escaped convict targeted Denise Fox in a violent and cruel attack.

On Tuesday night (September 3), the unhinged murderer began his campaign to get revenge on Jack Branning – who he hates for turning him in to the police after his role in the death of stepdad Ray Kelly.

While viewers have already threatened to boycott the soap if Hunter kills Jack, few predicted Mel’s son would turn on innocent Denise.

Poor Denise has been left in grave danger after she inadvertently walked into a trap set by Hunter.

After breaking into Jack’s home, Hunter lay in wait for him to return – but it was Denise who came home first after Whitney and Callum’s doomed wedding.

Caught out, Hunter confronted Denise and attacked her – seemingly hitting her over the head with his gun and leaving her slumped on the floor unconcious.

As boyfriend Jack enjoyed a drink with the newly returned Bianca in The Queen Vic, Hunter loomed over Denise’s lifeless body.

He said: “That’s the problem with Jack, ain’t it? Your lovely little boyfriend, only thinks about himself.”

Hunter then left Denise for dead on the floor, before heading for the wedding reception at the pub.

The episode ended with the vengeful Hunter walking towards the Vic with his gun in his hand and murder on his mind.

Fans were livid with the character for harming Denise, with one tweeting: “What the frick? Leave Denise out of this.”

Another added: “What has Denise ever done to Hunter?”

Has he killed Denise! #Eastenders

What has Denise ever done to Hunter? #EastEnders

Whats the frick LEAVE DENISE OIT OF THIS #EastEnders

Why do these people love killing off Denise #EastEnders

Somebody do something Denise has been injured #Eastenders pic.twitter.com/L4os7I5o5v

If hunter hurts one strand of hair from Denise’s weave I’ll kill him my self! #EastEnders pic.twitter.com/oFGVAIoBCm

A third exclaimed: “Oh my god, what has Hunter done to Denise?”

“Mel, your psycho son has hurt Denise. No one cares about your darling,” fumed another.

Denise is an extremely popular character with EastEnders fans, with many calling her their Queen.

Others commented on how good she looked, even while knocked out on the floor!

BBC soap fans will have to wait until Thursday (September 5) to discover Diane’s fate and the identity of who gets shot in the tense scenes between Hunter and Jack in the pub.