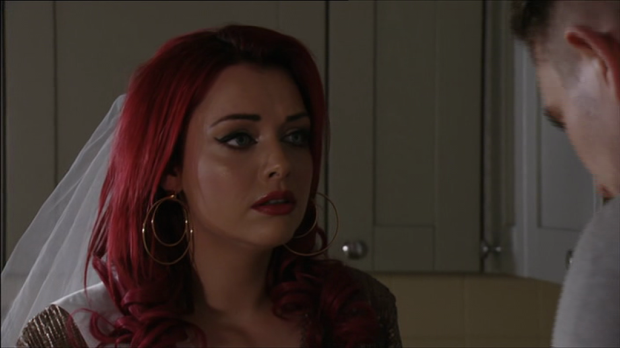 It was her hen night!

EastEnders fans were “heartbroken” for Whitney Dean last night, when she finally discovered her fiancé Callum ‘Halfway’ Highway had cheated on her.

The timing couldn’t have been worse for her either, as Callum choose to tell her on her hen night!

Viewers know that Callum and Ben Mitchell shared a night of passion earlier this year, and they’ve clearly been battling their feelings for each other ever since.

On Thursday (August 29), Callum skipped his own stag do to be with Ben who argued about Whitney, with Ben telling him he would only end up hurting Whitney in the long run.

Ben asked Callum: “How are you going to stand there tomorrow and marry her on a lie? You are going to hurt her sooner or later Callum.”

Feeling weighed down by guilt, Callum turned up at Whitney’s hen to come clean about his infidelity.

She replied: “Don’t worry, whatever it is we’ll sort it because we sort everything, don’t we?”

Callum then confessed he’d cheated on her – with Ben.

“I cheated on you,” he said causing Whitney to ask: “What? With who?”

Understandably, Whitney looked absolutely devastated when Callum told her it was with Ben.

And those watching from home felt the same.

While they all agreed that the episode was excellent, many were gutted for the bride-to-be.

Alongside a heartbreak emoji, one simply wrote: “Poor Whitney.”

Oh Callum!! Hope this isn’t the end of Callum and Whitney 💔 #EastEnders @bbceastenders

I actually feel sorry for Whitney. all she wants is a good guy #EastEnders

Another said: “Poor Whitney! I think my heart just broke in two!”

A third added: “No… Poor Whitney, I feel so sorry for her, she’s going to find it really hard to get over this. He has Ben, she has no one, so sad.”

“This is killing me now,” wrote one more. “So sad feeling the pain for Whitney. Please give her a happy ending for once, she so deserves it after all this.”

Some were less compassionate, and are now demanding that Callum and Ben get together.

Do you think Callum should marry Whitney? Leave us a comment on our Facebook page @EntertainmentDailyFix and let us know what you think!

The Durrells: Viewers call on ITV to show all episodes after series one rerun