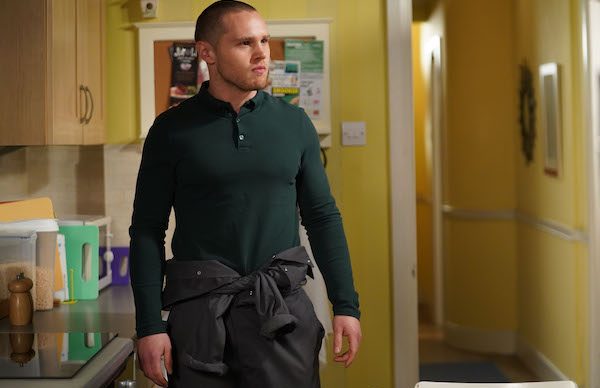 Who is out to teach the mechanic a lesson?

Keanu Taylor finds himself in serious danger during next week’s EastEnders when he wakes to find he had keen kidnapped and tied up in an abandoned warehouse – but is a vengeful Phil behind his terror?

With the news that Sharon Mitchell is having a baby as well as stepdaughter Louise, there is plenty to celebrate in the Mitchell house this week.

But by the time next week arrives, it seems the family’s happiness soon turns sour when Keanu Taylor decides it is time to tell Louise and Phil about his affair with Sharon.

Keanu is horrified to find out that Sharon is pregnant and it doesn’t take him long to realise that he could be the father of her baby as well as Louise’s.

Soap fans will remember that Keanu and Sharon reignited their affair for one night recently with a forbidden tryst in The Arches… but has that moment of passion left Sharon pregnant?

Sharon is adamant that the baby is Phil’s, but Keanu isn’t convinced and decides now is the moment to come clean about their relationship.

Sharon is horrified when Keanu tells her he’s planning to take Louise out for lunch and confess everything, but before she can stop him, Karen catches up with her.

Keanu’s mum is stunned when she realises that Sharon is also pregnant and that Keanu could be the father, and realising what a mess her son has got himself into, she agrees that someone needs to stop Keanu confessing everything.

But it seems Sharon and Karen might be too late, because by the end of the week Keanu is waking up in an abandoned warehouse, tied up and gagged.

But who would want to kidnap Keanu? Surely this has got to be the work of a vengeful Phil Mitchell?

It certainly seems like his handiwork, but does this mean Keanu told Louise the truth and now Phil also knows?

One thing is for sure, if Phil does know the truth about the affair, it doesn’t seem likely that Keanu will be getting out of that warehouse alive.

Do you think Phil is the one who kidnapped Keanu? Leave us a comment on our Facebook page @EntertainmentDailyFix and let us know what you think!