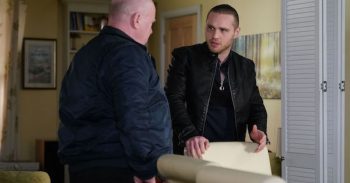 It's not going to be pretty!

It’s only a matter of time before EastEnders’ meathead Phil Mitchell discovers what has been going on underneath his pudgy nose all along… That his wife Sharon has been cheating on him with Keanu Taylor.

Viewers know that Shazza has been hopping into bed with a man much younger and fitter than her husband (although equally as bald – she obviously has a type) for some months now.

And when Phil finds out, the explosion will be heard from outer space.

But how far will he go to get his revenge? Will he kill Sharon or Keanu first?

Appearing on This Morning on Wednesday (May 22), actor Danny Walters has teased a bloody end for his character – hinting that the fallout won’t be pretty.

After all, it’s not just Sharon Keanu has been infiltrating. The mechanic also slept with Phil’s daughter Louise, got her pregnant and then broke her heart.

On the show alongside co-stars Tilly Keeper, Lorraine Stanley and Zack Morris, Danny tried not to give too much away when soap expert Sharon Marshall told him: “Phil’s probably going to have to kill you.”

Speaking to hosts Phillip Schofield and Holly Willoughby during This Morning’s Soap Week, Danny said: “There’s gonna come a crunch when Phil finds out and, when he does, who knows what’s going to happen.”

He added: “I think it always started with Sharon but it’s very complicated.

“Keanu is trying to create a good life with Louise, but that past he has with Sharon is a big problem when trying to move on with his life.”

Only last week, Keanu and Sharon gave in to their feelings for each other when they ended up having sex in the Arches.

Some fans predict that Sharon will get pregnant, too, in a storyline that would rock the Mitchell family to the core.

Meanwhile, Tilly – who plays Louise – told the co-hosts that being pregnant is set to change her character.

She said: “Keanu’s her first true love as well and, despite appearances, she’s just furious with him.

“She loves him but she won’t show it because, of course, Phil paid Keanu to be with her at first.”

Teasing more explosive storylines, she continued: “I think this pregnancy storyline is showing a new side to Louise a really lovely mature side.

“She’s claiming responsibility for her actions but of course the storyline isn’t over.

“It’s not just, ‘OK, she’s pregnant and she’s split up with Keanu’, there are lots of twists to come and so many curve balls being thrown their way – I can’t keep up.”

Nor can we Tilly!

How do you want the Sheanu/Phil storyline to end? Leave us a comment on our Facebook page @EntertainmentDailyFix and let us know what you think!