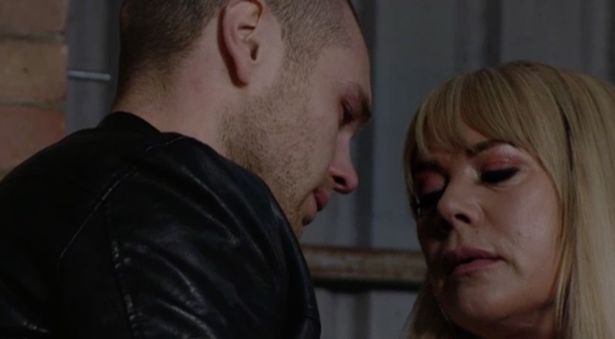 Louise and Sharon BOTH pregnant with Keanu's baby?

Fans of EastEnders have a big prediction about the Mitchell family. And, if it comes true, BBC viewers are set for an EXPLOSIVE Christmas storyline.

Think Two Births And A Funeral…

During Tuesday night’s visit to Walford (May 14), Sharon Mitchell gave in to temptation once again and ended up reuniting with young lover Keanu Taylor.

As the pair confessed their love for each other, and enjoyed make-up sex in the Arches, you’d be forgiven for thinking the only protection they’d need is when Sharon’s husband Phil eventually discovers the truth about their on/off affair – and he will.

But some fans were thinking about the OTHER form of protection – like did they use any? And could Sharon, in fact, get pregnant?

We know that Sharon’s stepdaughter Louise is also pregnant with Keanu’s baby – after deciding NOT to have an abortion and choosing to keep her decision a secret.

Now fans believe that Louise AND Sharon will both be pregnant with Keanu’s children at the same time.

One tweeted: “Sharon will get pregnant with Keanu’s baby. #EastEnders.”

Another added: “Sharon will be pregnant next.”

A third said: “So both Sharon and Louise will be pregnant.”

Sharon will get pregnant for Keanu baby #Eastenders

Could you imagine IF Keanu got Sharon and Louise pregnant #Eastenders

Viewers know that while Keanu is 19, Sharon is 48. Not impossible for her to announce she is pregnant – not in the world of soaps, anyway!

Sharon already has son Denny, from her previous relationship with her adoptive-brother-turned-husband Dennis.

She was stunned to discover she was pregnant on Christmas Day 2005, after believing she couldn’t conceive due to fertility issues.

Could Sharon have ANOTHER miracle baby?

One fan remarked: “Alfie was supposedly infertile, and was with Kat (and others) for years without any resulting pregnancy. Then the ‘miracle’ twins were born.

“And then he has a one night stand with Hayley and bingo! Another miracle occurs.”

Could Sharon get pregnant and give birth in a manger at Christmas?

Would you like to see Sharon get pregnant with Keanu’s baby? Leave us a comment on our Facebook page @EntertainmentDailyFix and let us know what you think!