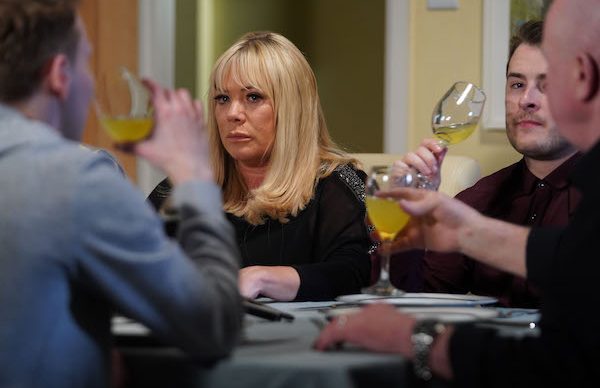 But is the daddy Phil or Keanu?

There’s shock heading for the Mitchell family this week when Sharon finds out she’s having a baby… but the big question is, who’s the daddy?

EastEnders fans watched the Mitchell matriarch indulge in a passionate fling with husband Phil’s sidekick, Keanu, last year – something that came to an abrupt end when Phil sent the mechanic out to Spain to do his dirty work.

But while Keanu seemed to have moved on with Phil’s daughter Louise (clearly he likes a Michell woman, what Keanu!) he spent a night of passion in The Arches with Sharon recently just for old times’ sake.

Louise, who is also in the family way and secretly still expecting Keanu’s baby despite the fact she told everyone she’d had an abortion, is struggling with still having her baby daddy on the Square.

So this week sees Phil try his best to get rid of Keanu by arranging him a job away from Albert Square… sounds familiar!

But when Louise hears that Keanu is leaving, her feelings for her ex resurface and she opens up to best friend Bex about the fact she is secretly still pregnant.

Bex urges her friend to tell Keanu the truth, and when Sharon later finds Louise crying over what to do, she urges her step daughter to do the right thing and make amends with Keanu.

Taking on Bex and Shaon’s advice, Louise heads off to see her mencanic ex, and she is left stunned when he reveals that he is still in love with her and desperately wanted to keep their baby…

After hearing the words that she has waited weeks for, Louise is thrilled that he feels the same way and tells Keanu that she is actually still pregnant after not being able to go through with the abortion.

As the thrilled pair share a tearful reunion, they’re completely unaware that across the Square there is a drama unfolding that could tear them apart once again.

As Louise and Keanu vow to get their relationship back on track, Sharon is sitting alone with a pregnancy test, staring at it in disbelief as it shows a positive result.

Reeling from the news that she is pregnant, Sharon is forced to hide her baby news as Keanu and Louise revel in their rekindled romance.

Even Phil is thrilled for the pair, and gives Louise flowers… and despite gently warning Keanu that he’s better not break his daughter’s heart, it is clear that Mr Mitchell is pleased.

But how would he feel if he knew is wife was pregnant and that Keanu could be the dad?

As Sharon, Dennis and Phil attend a family counselling session together, the session goes from bad to worse and Sharon is left feeling down about the fact she can’t even control the child she already has, let alone another one.

Making the decision that she can’t have the baby, Sharon researches abortion clinics. But as she is trying to get an appointment, Keanu interrupts to check that there are no bad feelings between them now that he is back with Louise.

Sharon is forced to hide her true feelings and manages to get rid of her former lover… but when Phil finds the abortion clinic website on the computer, he is left reeling – convinced that Louise has had another change of heart.

Will Sharon come clean that she is the one who is pregnant? And could this baby bombshell be what it takes to reveal the truth about Sharon and Keanu’s affair?

Do you think Sharon will keep her baby? Leave us a comment on our Facebook page @EntertainmentDailyFix and let us know what you think!