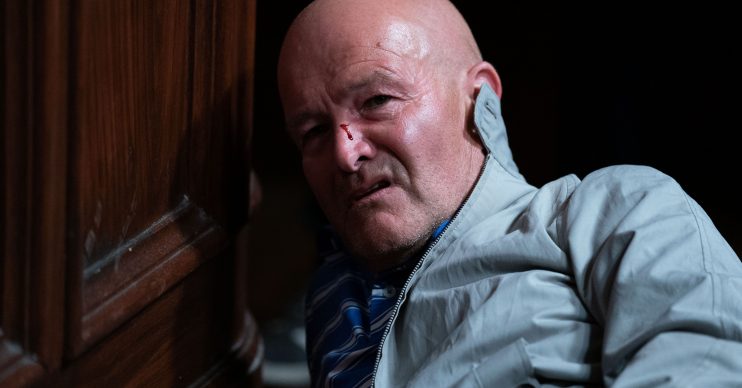 He spells trouble for Phil Mitchell

Trouble is heading back to EastEnders tomorrow night when Jonno Highway returns to see his sons Callum and Stuart.

It’s not a happy reception for Jonno, who didn’t leave on the best terms after making homophobic remarks in front of Ben and Phil Mitchell and making fun of Callum in front of then-fiancée, Whitney.

Stuart eventually threatened to kill his dad if he didn’t leave, so Jonno went, but he returns on Tuesday October 1 – and he hasn’t changed a bit.

Jonno first runs into Stuart, who warns his father to go, but when Jonno then sees Callum on the Square things escalate between them.

As Jonno continues to stir up trouble, Callum finally stands up to his dad and Jonno is left fuming.

He’s intrigued when he learns the wedding was cancelled and wants to know why.

As everyone tries to cover for Callum, will he come clean about the fact he’s gay?

Things are soon threatening to get out of hand and it’s an unlikely ally that steps into help Callum – Phil.

He swoops in and punches Jonno issuing him with a sterm warning.

Will Jonno listen? Is this the last we’ll see of him? And will Phil’s actions come back to bite him?

Callum and Ben are struggling to find their way as a new couple following the breakdown of Callum and Whitney’s relationship.

Despite the fact he knew he was gay – and had had a fling with Ben – Callum was determined to marry Whit and make it work.

It all got too much for him though and he confessed the truth on the night of their stag and hen dos.

Whitney had intended to go ahead with the wedding anyway, desperate to get her happy ending, but wise words from Bianca and a run in with Ben made her realise she deserved more and she jilted Callum at the altar.

After going on their honeymoon alone, Whitney returned last week and told Callum she’s met someone else and it was time he moved on too.

Unfortunately for Whitney that someone else has been confirmed to be no good – he’s Leo King, son of her paedophile abuser Tony King.

He’s in town to prove his dad’s innocence and it’s no accident that he’s charming Whit – but will she work it out before she gets really hurt?