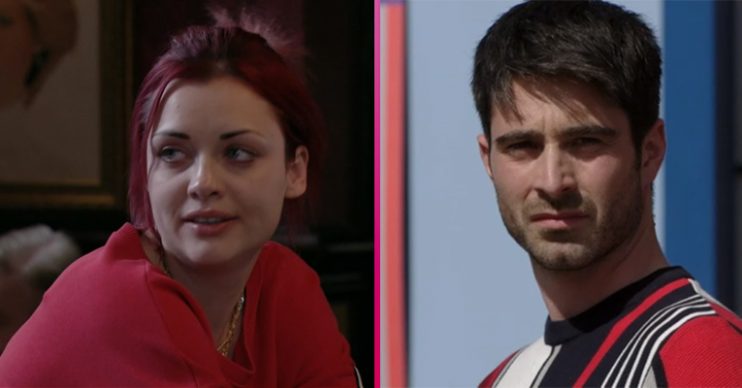 This would be a bit strange

Fans of EastEnders are predicting a new romance for Whitney Dean – with newcomer Leo King.

But the fact that Leo is the son of Whitney’s abuser, Tony King, makes that possibility more than a little strange.

Whitney has yet to cross paths with Leo, who turned up in the Square last night (Monday September 10) as well as at Whit’s doomed wedding to Callum Highway.

Bianca, panicking when she spotted Leo talking to Tiffany, packed Whitney off on her honeymoon to get her away from the Square.

But she won’t be away forever and with Leo threatening B that he was sticking around and would be tormenting her and her family, it’s sure Leo will target Whitney at some point…

I think Whitney is gonna get over Callum by going with Leo. 😯 #Eastenders @bbceastenders

Over on the Digital Spy forums another person added: “What’s the betting he ends up with Whitney if he’s a regular?”

Replying to one user who said they’d read Whitney would remain single for a while, another said: “They can certainly build onto that if that’s the route they plan to go as long term… a long build up would be good, even if she is single for a while.”

On another Digital Spy forum questioning who Whitney will get together with next, one person said: “I wouldn’t be surprised if it’s Leo.”

Someone else added: “Yep, probably Leo, for maximum angst.”

Long-time EastEnders viewers will remember Leo’s dad, Tony King, was the boyfriend of Bianca Jackson, and he groomed and abused her stepdaughter Whitney Dean.

Although Whitney believed they were in a relationship and in love, it was clear to Bianca that Tony was a paedophile.

Tony was arrested and sent to prison for his crimes, and three years after he was convicted he took his own life in his prison cell.

And now his son, Leo, is in town to avenge his father’s death.

Viewers think the twist is brilliant and can’t wait to see where it goes.

Oooh I like where this Bianca / Whitney / Tiffany / Leo thing is heading.. powerful scenes galore #Eastenders

Omg Tony King’s son..I didn’t see that one coming 😯. Could this be the big storyline that Whitney has coming up? Maybe she & Leo become an item without her knowing his true identity? 🤔 Looking forward to seeing where this goes #EastEnders https://t.co/JA06ahNjc4

That was a brilliant twist, introducing Leo King like that. Already wonder how Whitney will react.#Eastenders

So Bianca does know Leo.. Turns out his dad is Tony who Bianca was dating but he also sexually abused Whitney and started grooming Lauren… How interesting… #Eastenders

#Eastenders #leo a devils son has arrived. Knew he was related to #bianca somehow, we know what a sick scum tony was. Now Bring on his awful son. An exciting autumn ahead 👏👏👏 pic.twitter.com/ys49IRkK13

Over on the Digital Spy forums, others agreed: “Very interesting to see where this goes, much more intrigued now it’s not just a cardboard villain after Bianca but someone who’s actually connected to her and Whitney.”

Another added: “I think bringing in Tonys son is genius. Both Whit and Tiff have been quite vulnerable of late and Leo will no doubt use it to his advantage. The Jackson/Brannings need binding together.”

Indeed, show boss Kate Oates has confirmed there are big things coming up for Whitney – and her failed wedding was just the start.

Tom Wells has taken on the role of Leo having previously starred in Doctors and Bancroft.

Speaking about his new role, Tom said: “I’m really excited to be joining the EastEnders team and seeing what’s in store for Leo.

“He’s definitely a man not to be trusted and I can’t wait to see him settle into Walford, it’s going to be fun.”

Jon Sen, Executive Producer of EastEnders added: “Bianca’s return sparks a gripping new story with the arrival of Leo King – a dark and misguided figure who has grown up with the stigma of being the son of a convicted paedophile.

“We are thrilled to welcome Tom to the Square, knowing he will bring depth and complexity to the role of Leo, a man who believes his father has been wronged and who will also go to great lengths to prove it.”