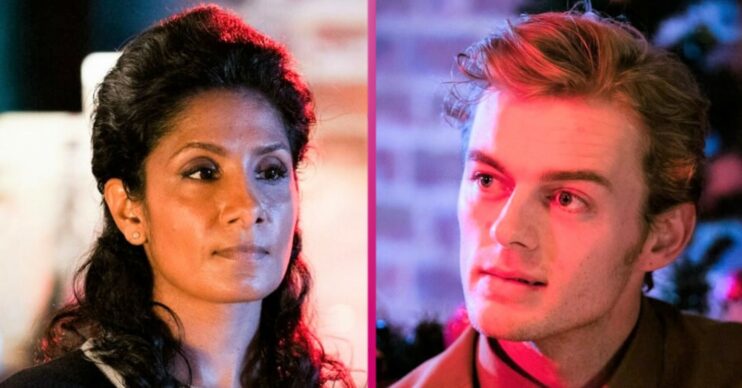 She feels she has a point to prove

EastEnders spoilers for January reveal Suki Panesar seduces Peter Beale once again, but what is she trying to prove?

The Panesar matriarch and the Beale heir had a one-night stand last year, but he has since gone on to date her daughter, Ash.

Meanwhile, Suki developed feelings for Honey Mitchell and an argument between the pair forces her back into Peter’s arms.

Honey and Suki are barely on speaking terms after Suki tried to kiss Honey and the latter rejected her.

Despite Honey trying to make Suki feel better about the move, Suki has lashed out and been punishing her former friend ever since.

When the pair run into each other in the New Year, Honey asks Suki an important question.

Backed into a corner, and spooked over another run-in with Ash, Suki forcefully admits the truth.

Honey desperately tries to sympathise with Suki, but Suki just storms off.

She finds Peter in Ruby’s drinking alone and riled up from her confession to Honey, Suki pounces.

She makes it clear she wants him and determined to prove a point, drags him back to her place for the night.

It’s clear she has mixed feelings about the encounter the next day when Peter returns to collect his watch.

Suki’s not impressed to see him again, but he goes into the bedroom to retrieve it, just as the door goes… Who will catch them out this time?

When did Suki and Peter sleep together before?

In January 2021, Suki broke up a party which Peter was at at her house. He dropped his wallet and returned to collect it.

But he found Suki going through it and holding up a condom.

As the pair began a flirtatious conversation, Peter told her he could see where her daughter got her looks from – and her mouth.

Suki replied by asking Peter if he wanted to see how well she could use her mouth before the scene cut away.

It became clear they had slept together and Suki later used it to try to stop him dating Ash, though it didn’t work.

Are Suki and Peter going to get together properly this time?