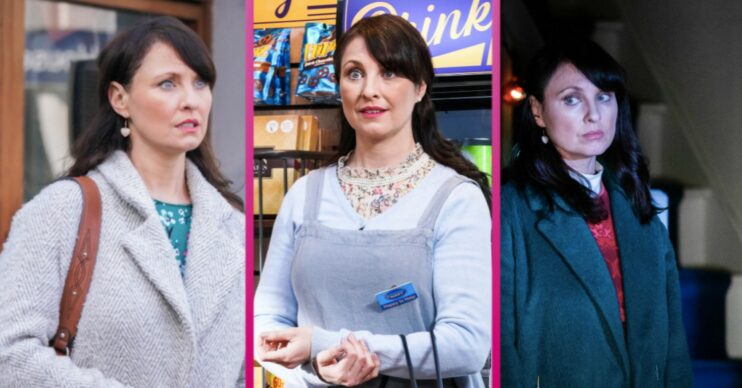 Honey Mitchell in EastEnders: How many kids does she have? And are she and Jay Brown really for keeps?

She's been unlucky in love, but has she hit the jackpot this time?

Honey Mitchell in EastEnders is the big-hearted, sweet-natured former wife of Billy Mitchell. She’s the mum of Janet Mitchell and William Mitchell, and she’s enjoying a romance with younger man Jay Brown.

Honey’s real name is Susan and she arrived in Albert Square when she was employed by Yolande Trueman as a honey trap to test her husband Patrick Trueman’s loyalty.

Patrick passed the test – after Honey got him confused with Billy – and Honey stayed in Walford, and struck up a romance with Billy.

Who plays Honey Mitchell in EastEnders?

Honey Mitchell in EastEnders is played by actress Emma Barton.  She’s been in other television shows including Spooks, You, Me and Them, and Doctors.

She’s also an experienced stage actress and has been in shows including Grease, Chicago, and One Man, Two Guv’nors.

Read more: Zoe Slater in EastEnders: What happened to her? What is Michelle Ryan up to now?

In 2019, Emma took part in Strictly Come Dancing, paired with professional dancer, Anton du Beke. The pair got to the final, but lost out to soap star rival Kelvin Fletcher and his partner Oti Mabuse.

Emma’s also a keen runner and has taken part in the London Marathon.

Billy and Honey planned to get married but their first jaunt down the aisle in June 2006, ended in disaster when poor Honey was struck down with food poisoning and ended up in hospital.

Their second wedding a month later also went wrong when a stag night prank meant Billy didn’t make it to the ceremony in time.

The third time they walked down the aisle, in September the same year, it was a surprise wedding arranged by Peggy Mitchell. But heavily pregnant Honey was in labour. Thankfully they tied the knot and Honey rushed off to hospital.

Honey gave birth to a little girl, who she named Janet after her mother. But when her daughter was found to have Down’s syndrome, Honey struggled to cope. She changed the baby’s name to Petal, because she wasn’t the perfect daughter she’d hoped for and told Billy she wanted her adopted. She even – at her lowest point – considered smothering the baby with a pillow.

But when Petal needed an operation and Billy wrote an emotional letter to his little girl, Honey began to bond with her daughter. She changed her name back to Janet, and she is now devoted to the little girl.

When Honey got pregnant again, the pair were worried about the new baby. William was born after Honey was knocked over and initially they thought he’d been stillborn. But thankfully the tot survived.

The end of Honey and Billy Mitchell in EastEnders

After years of money struggles, Billy got involved in crime and when Jase Dyer – Jay Brown’s real dad – was stabbed, Honey was horrified to discover that instead of helping him, Billy had hidden while he died. She ended their marriage and left Walford.

In 2014, Honey came back to Albert Square and Billy thought she wanted to rekindle their romance. But she’d actually returned to tell him she was off to Canada with the kids because Will was pursuing a modelling career.

When Will’s contract ended, the family came back to Walford again and this time Honey and Billy did get back together.

And when Janet was knocked over, Honey was devastated. Only made worse when she found out that while she was frantically at her daughter’s bedside in hospital, Billy was having sex with Tina Carter. Who’d been driving the car that hit poor Janet.

Not surprisingly, that was the end of Honey and Billy for good.

Since then, Honey’s had a romance with too-good-to-be-true dentist Adam Bateman, who cheated on her.

Honey was a model in her younger days and struggled with an eating disorder. Her bulimia and binge eating came back in 2020 after the end of her romance with Adam. Luckily, Honey’s friend Ash Kaur realised something was up. Honey eventually confided in Ash.

Billy also twigged what was going on and helped his ex-wife deal with her issues.

Honey is now in a relationship with Jay Brown – who Billy considers to be his son.

Their romance caused a scandal in the Square and Billy is still furious about it and determined to win Honey back. It seems she’s happy with Jay for now, though. Is there any future for Honey and Billy?