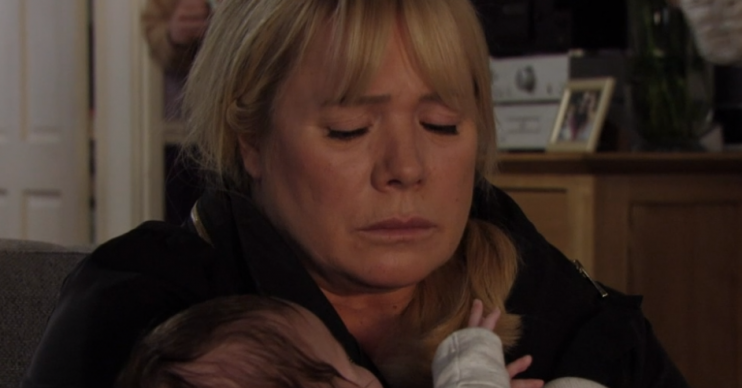 There's just too much for her to deal with

It’s fair to say no one would wish what EastEnders‘ Sharon Mitchell is going through on anyone.

But as the grief threatens to consume her next week, she ends up making a decision that will change her life forever.

Struggling with planning the funeral of her eldest son, Dennis, who lost his life in the EastEnders 35th anniversary episodes, Sharon breaks down as she talks to Linda about the arrangements.

Linda offers to look after Sharon’s newborn Kayden to give Sharon a break, and later accompanies her friend to register the tot’s birth.

However, on their return, Sharon gets a call that leaves her totally broken: they are releasing Denny’s body.

It’s all too much for Sharon who the next day asks Karen to look after Kayden, leaving the baby’s grandma thrilled.

Sharon tries to get to work planning Dennis’s funeral again, supported by Kathy, but it’s not long before the distraught mum breaks down.

When Sharon goes to see her son’s body, she completely loses it and is inconsolable.

What has Sharon decided to do? And will she live to regret it?

When Ian finds out what she’s done, he’s wracked with guilt. It gets even worse when she thanks her best friend for his support.

Reeling from Sharon’s latest confession, Ian comes up with a plan to help Sharon out – is it the right thing to do?

Will Ian’s plan work? Or could it end up making things a whole lot worse?

Viewers know Ian was partly responsible for Dennis’s death, but Sharon has no idea.

Ian had locked Dennis in the locker room of the boat that was on the Thames, celebrating The Queen Vic winning Best London Pub, after discovering Dennis was responsible for the hateful posts about Ian’s son Bobby.

Intending to report Dennis to the police when the ship docked, Ian was thrown into a panic when they hit something and the lower decks started filling up with water.

Despite his attempts to get Dennis out, a surge of water caused Dennis to drown, leaving Ian distraught at his role in the death of the teenager.

Dotty Cotton has discovered what Ian did and is blackmailing him to keep quiet.

But secrets don’t stay hidden in Walford for long and it’s only a matter of time before Sharon finds out the crushing truth.

And where will that leave her life-long friendship with Ian then?