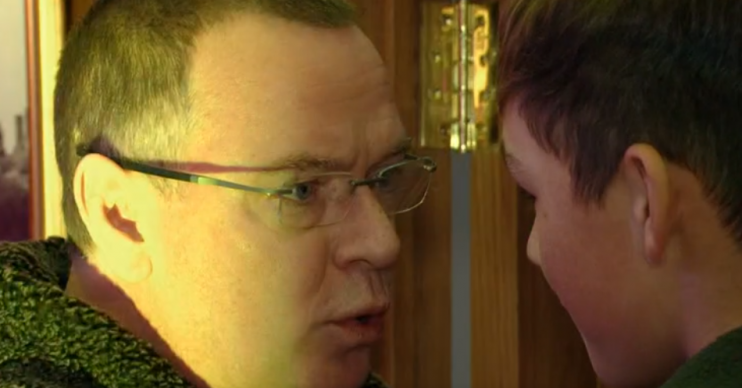 Dennis is a child!

Viewers of EastEnders were disgusted as Ian Beale seemingly left 13-year-old Dennis Rickman Jr to die on the boat.

In last night’s episode of the soap (Tuesday February 18 2020) Ian’s son Bobby was attacked by a gang whilst on his way to mosque with Iqra and Habiba.

The attack left Bobby with a bleed on his brain and he required surgery to save his life.

Meanwhile, Dotty Cotton had found out Dennis was behind Bobby’s online abuse and after Bex told her about the attack, Dotty told her what she found on Dennis’s computer.

Ian went to the boat party looking for the teenager and confronted him, telling Dennis about Bobby’s injuries.

But Dennis clearly didn’t care and kneed Ian in a sensitive area.

Ian eventually caught up to Dennis on the lower deck of the boat, but Dennis pushed Ian too far calling him “pathetic” and saying that his mum Sharon would never go out with him.

Seeing red, Ian smacked Dennis and proceeded to lock him in the boat’s changing room.

Later the boat ended up crashing and when Ian heard the lower decks had taken on water he rushed down there to help Dennis.

But an explosion caused Ian to drop the door keys in the water and the lights went out making it hard to see.

As the schoolboy screamed for help, Ian turned to leave Dennis.

IF IAN LEAVE DENNY I WILL RIOT. PLEASE DONT DO THAT TO SHARON #eastenders Omg Ian is such a coward!! I can’t believe he’s leaving Dennis like that to save himself #Eastenders

I must be the ONLY one who wants Ian to save Dennis. #EastEnders

#eastenders is Ian going to leave Dennis locked up?? 😱

#eastenders is Ian going to leave Dennis locked up?? 😱

Ian is such a coward! Can’t stand his character. #Eastenders

Will Ian go back and help Dennis, or will he let him drown?

Ian is such a coward!

Whilst trapped in the room, Dennis left a voicemail for Sharon telling her Ian had locked him in a room on the boat, but Sharon is in labour.

Will Dennis get free before the room fills up?