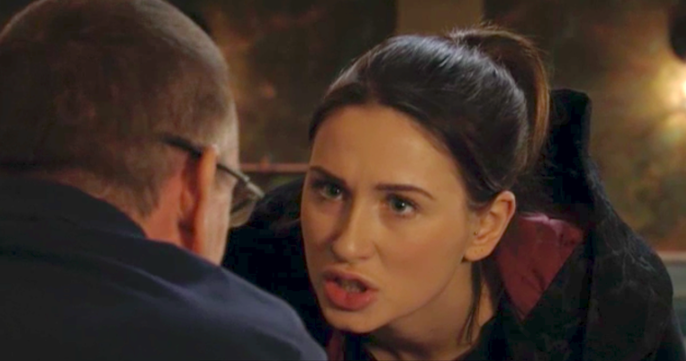 She has incriminating evidence against him

Dotty Cotton has discovered the truth about Ian Beale’s involvement in the death of Dennis Rickman Junior – and the EastEnders character is hellbent on twisting the situation to her advantage.

On Thursday night (March 5), she decided to blackmail Ian – threatening to reveal all unless he gets her The Arches.

But viewers were divided over the storyline – with some slamming Dotty for being evil “just like her dad” and others enjoying seeing Ian squirm.

Others were confused, however, wondering how the hell Ian would be able to get The Arches away from half-brother Ben?

I am truly obsessed with the blackmailing queen that is Dotty Cotton.

In emotional scenes last night, Dot Branning’s granddaughter found a long-forgotten phone and saw one of the last calls was from Dennis…

Too tempting not to listen to, she heard a voicemail from Denny pleading with Ian to free him from the locked cloakroom on the party boat.

He cried: “Help! Help! Help me! Ian, where are you? I’m sorry all right, I’m sorry. Open the door please! There’s water coming in.”

With the evidence she needed, Dotty revealed her discovery to Ian who was panicked and horrified.

Deciding to use it as a bargaining chip to secure her future after Shirley’s plans to close The Arches, Dotty told Ian she’d like him to purchase The Arches on her behalf in exchange for her silence.

She told Ian: “Dennis died because of you.”

Later that night, Ian set up another meeting with Dotty in the cafe’s kitchen in order to buy the teenager’s silence once and for all.

He begged: “Tell me what you want to make this go away.”

To which she replied: “I want The Arches. Ben’s your brother. Half, quarter, fifth, whatever. He’s your blood. He owns The Arches. And I want it. And if I don’t get it, then I’ll let everyone know who you really are.”

Some of those watching from home were thrilled with the twist and loved the darker side of Dotty, with one tweeting: “Loving this side of Dotty, blackmailing Ian.”

Another said: “I am truly obsessed with the blackmailing queen that is Dotty Cotton.”

A third added: “I like Dotty, she makes me laugh. I feel like she’s got an evil side to her, but she’s an interesting character!”

I like dotty, she makes me laugh, feel like she's got an evil side to her, but she's an interesting character!

I enjoyed it @millyzero Nick would be proud

“Such a great duff, duff moment,” added another, while one more said: “I enjoyed it @millyzero. Nick would be proud.”

But others turned against the character, with one blasting: “EastEnders are not known for their complex characters, but this is just too flat. There’s not a single redeeming factor to Dotty and that makes her boring. She’s not even an interesting baddie.”

Another agreed, typing: “Dotty is a complete bore of a character.”

A third said: “So her efforts at blackmail are centred around something Ian can’t possibly give her without several people getting involved and blowing the whole thing? Truly Nick Cotton’s daughter, NOT! She only noticed Ian being shifty because she was born shifty.”

So her efforts at blackmail are centred around something Ian can't possibly give her without several people getting involved and blowing the whole thing? Truly Nick Cotton's daughter, NOT! She only notice Ian being shifty because she was born shifty.

She seems to lack empathy

Me three. I mean, Eastenders are not know for their complex characters, but this is just too flat. There’s not a single redeeming factor to her and that makes her boring. She’s not even an interesting baddie.

“Of all the things she could have demanded – £10k, a luxury holiday, a brand new car, a place of her own – no she wants the grotty Arches,” remarked one.

Another said: “Get rid of Dotty, she’s nothing but a bloody horrible cow. Can’t stand her. She’s done nothing but cause trouble.”

Some viewers thought the storyline was “stupid”, and others backed Ian, believing he’s not responsible for Denny’s death in the first place.

Will Dotty get what she wants? And will Sharon ever discover the truth about her son’s death?