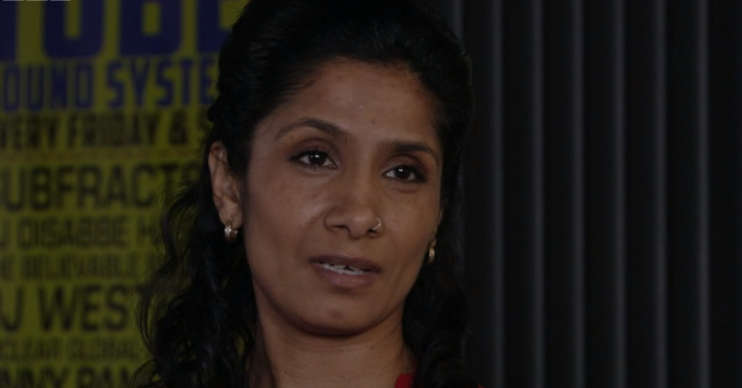 Suki has been lying to her family for months

Viewers of EastEnders were left disgusted last night as Suki Panesar tried to justify lying about having cancer.

For months, Suki has been telling her family and friends that she has been battling the disease.

She quickly became friendly with Jean Slater, who has been dealing with ovarian cancer.

Determined to make sure Suki has the support she needs, Jean has been trying her best to help her new neighbour and recently, Suki attended a memorial for Jean’s partner Daniel, who died from cancer.

Read More: EastEnders viewers convinced Whitney and Gray will have an affair

However Shirley told Jean that she was suspicious about Suki and although Jean was quick to defend her new friend, Shirley’s words clearly played on her mind.

In last night’s episode (Monday March 9 2020) Jean subtly tried to get the truth out of Suki at a meeting for those going through chemotherapy.

Jean’s suspicions were confirmed when Suki used Jean’s words to express how she feels about having cancer.

Later, Jean decided she wasn’t going to stand for it and outed Suki in front of her children Kheerat, Jags, Ash, Vinny and Ash’s girlfriend Iqra.

Suki is one nasty, manipulative woman.

Although Suki’s children weren’t sure on whether to believe Jean, Kheerat decided to call Suki’s bluff and told his mum he was going to evict the Slaters from their house.

Realising her lies would lead to the Slaters being homeless, Suki confessed that she didn’t actually have cancer.

However Suki explained her reasons to her children saying that she had previously had inconclusive test results and that she needed to bring her family together before her husband, their father, father got out of prison.

Suki managed to manipulate her oldest sons Kheerat and Jags into forgiving her by claiming that it hurt her to lie about having cancer, but she did it for them.

She even stated that she isn’t ashamed and that she’d ‘never been prouder of anything in her life’.

Viewers were disgusted that Suki tried to justify lying about cancer and expressed their thoughts on social media.

Suki is a nasty piece of work, a vile character, BUT I am relieved to have a female villain on the show #EastEnders 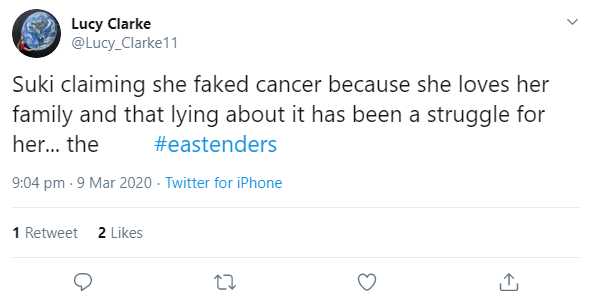 Suki is such a manipulative woman. How did she even manage to victimise herself after lying to her kids about being sick, and acted like they did her wrong. I am APPALLED she even had the nerve :/ #eastenders

Suki is actually sick. What a vile character #EastEnders

Although Jags and Kheerat appear to have forgiven her, it looks like Vinny and Ash will need more convincing.

Will they ever forgive Suki for her lies? And does she even deserve it?