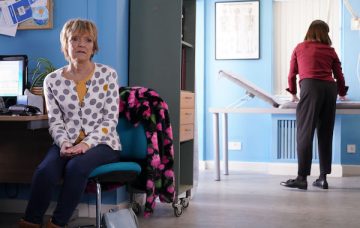 It's a sad start to the year for poor Jean

Jean Slater is set to have her world turned upside down next week when she goes to see her doctor and she’s told she needs a series of tests.

But despite being worried about what her doctor is telling her, Jean doesn’t tell anyone at home what is going on, instead keeping her news to herself.

As the rest of the Slaters prepare for Hayley’s homecoming, no one seems to notice that Jean isn’t her usual self.

And, even when Ian tries to apologise for the way he behaved when their relationship ended, no one notices that something is amiss when she uncharacteristically puts her ex in his place.

In the end it is actually Shirley Carter who realises all is not well with Jean.

She tries to cheer her up the best way she knows how… by gatecrashing a hen party and partying away her friend’s worries, but it doesn’t quite go to plan.

Jean is on edge the whole evening and in the end it all gets too much and she dashes out of the E20, with Shirley not far behind her.

Outside Jean breaks down and Shirley knows for sure that something isn’t right, but will she get her friend to reveal all?

The following day Jean is upset to realise that Shirley has told Mo about her outburst, and rushes over to The Vic to confront her.

But why is she so adamant that her family are being kept in the dark about her health concerns?

EastEnders recently revealed that Jean is set to have a heartbreaking start to the year as she is diagnosed with life-threatening ovarian cancer.

The soap announced that not only would Jean face the battle of a lifetime, but that her diagnosis would also trigger her existing mental health issues.

In a statement EastEnders confirmed they are working closely with Macmillan Cancer Support to make sure they portray the storyline perfectly.

Actress Gillian Wright, who plans fan favourite Jean said: “It’s an honour and huge responsibility to be taking on such an enormous issue, affecting so many women and their families.

“I’m aware of the impact such stories can have. I hope the storyline helps awareness of the disease and is supportive to those what are affected.”

Do you think soaps are right to tackle issues like this? Leave us a comment on our Facebook page @EntertainmentDailyFix and let us know what you think!