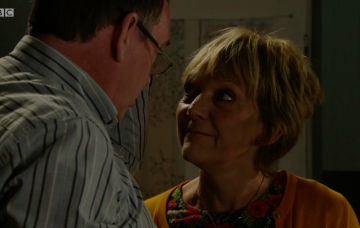 It's a Christmas miracle!

EastEnders fans have been left delighted after Ian Beale and Jean Slater kissed.

The unlikely coupling locked lips in touching scenes last night and fans were surprised at how much they liked the scenes.

Cleaner Jean has been growing closer to Ian over the last few weeks after the chip shop owner joined her choir.

And last night when she went to visit Ian and found him peeling vegetables in darkness, she decided to stay and keep him company.

But as he cracked the wine open and the pair opened up to each other, sparks flew.

One thing led to another and soon unlucky in love Ian and Jean were kissing in the Beale kitchen.

And fans loved the heartwarming scenes and took to Twitter to discuss it.

“Jean and Ian are honestly the weirdest couple but I’m here for it. #Eastenders,” wrote one fan.

Another asked: “Why am I warming to Ian and Jean? #EastEnders”

However, with Ian’s track record with women this could spell disaster for Jean as his wives don’t tend to stick around Walford for long – if they survive.

His first wife Cindy died in prison, his second Mel fled only to return recently, his third wife Laura died and his fourth wife Jane was left paralysed by his son Bobby and fled Walford.

What do you think of Jean and Ian? Leave us a comment on our Facebook page @EntertainmentDailyFix and let us know what you think!