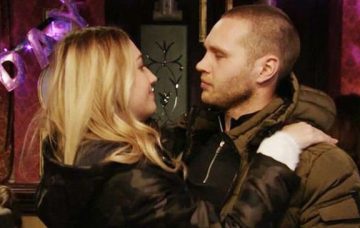 She was accused of ageism too

EastEnders fans have lashed out at the soap after Louise Mitchell’s controversial comments on death.

On Tuesday (29 January), some viewers were left feeling extremely uncomfortable during a scene between Louise and her older lover Keanu Taylor.

As the festivities continued in the Queen Vic, she told Keanu she wanted to DIE at the age of 27.

The daughter of Phil Mitchell told Keanu that being 50 was too old, and that people of that age are ‘well past it’.

Unaware of Keanu’s recent infatuation with older woman (and her step-mum) Sharon, Louise described how boring the party was, saying: “It’s a shame you don’t have your own place, we could have carried on the party, just the two of us.”

Keanu replied: “It’s not really my thing, parties are for 50-year-olds.”

Louise said: “Yeah, I know what you mean. Fifty’s well past it, I hope I don’t live that long.”

She then added: “Twenty seven is a great age to die, isn’t it? It’s like Amy Winehouse.”

Keanu was not happy with her comments, blasting: “Don’t talk so stupid, that’s something a kid would say.”

And viewers were quick to agree with him, especially in light of the fact Shakil died tragically young just last year.

One said: “How selfish and naive is Louise saying she hope she don’t live until she’s 50. There are so many people out there who don’t even get the chance #EastEnders.”

Another slammed the soap, saying: “That was poor #EastEnders. [Bleep] disgusting. Louise: ‘Hope I don’t live that long, hope I die at 27 like Amy Winehouse.” WTF?”

@bbceastenders I found tonight’s episode most offensive towards age……at least 4 times 50 was referred to as ‘old’ did you know there is a law against this? #EastEnders

How selfish and naive is Louise saying she hope she don't live until shes 50. Theres so many people out there who don't even get the chance #Eastenders

A third claimed the comments were illegal, writing: “@bbceastenders I found tonight’s episode most offensive towards age. At least four times 50 was referred to as “old”. Did you know there is a law against this? #EastEnders.”

Will Keanu realise he’s with the wrong Mitchell? Keep tuned!

Did you find Louise’s comments offensive or is she just a youngster? Leave us a comment on our Facebook page @EntertainmentDailyFix and let us know what you think!