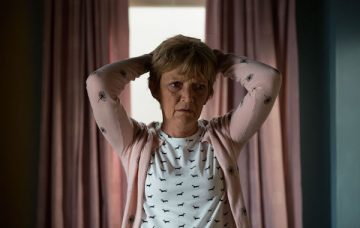 There's more heartbreak ahead for the fan fave...

EastEnders fans are set for a horrible shock later this year when one of their most beloved characters gets dealt a devastating blow.

In scenes to air over the coming weeks, Jean Slater will face one of her toughest battles ever, when she is diagnosed with life-threatening ovarian cancer.

Viewers will undoubtedly watch in horror as Slater favourite Jean, played by Gillian Wright, will be forced to come to terms with her heartbreaking diagnosis, which will also trigger her existent mental health issues.

In a statement released today (Friday 25 January), EastEnders confirmed that they are working closely with Macmillan Cancer Support on the storyline.

Georgina Wiley, Treatment and Recovery Advisor at Macmillan Cancer Support, says: “Being diagnosed with cancer can turn someone’s whole world upside down and stories like Jean’s can genuinely save and improve lives.”

The spokesperson went on to say: “It’s been a privilege to work with EastEnders to ensure the plot and the language used in the scripts are a true reflection of the impact that cancer can have.

Meanwhile, actress Gillian said: “It’s an honour and a huge responsibility to be taking on such an enormous issue, affecting so many women and their families.

“I’m aware of the impact such stories can have. It’s important we treat the issue of cancer diagnosis and treatment with huge sensitivity, dignity and respect. I hope the storyline helps awareness of the disease and is supportive to those that are affected.”

EastEnders boss Kate Oates added: “Jean’s diagnosis will impact every aspect of her life, including her family, her friendship groups and her mental health, and I know an actor of Gillian’s calibre will approach the story with great truth and depth.

“The Slaters are an amazing ensemble family, full of complex and well-drawn characters, and this story is a completely fresh subject for them to tackle.

“I know they’ll do it justice and in turn raise awareness of such an important issue that affects so many people.”

We don’t yet know if Jean will make it through the horrifying battle with cancer, but we DO know that her estranged son Sean Slater is returning this spring.

Rob Kazinsky is making a comeback 10 years after we last saw him in Walford.

Is he returning to support his mum through her illness? If so, why will his return be so brief?

How do you feel about this sad Jean Slater news? Leave us a comment on our Facebook page @EntertainmentDailyFix and let us know what you think!