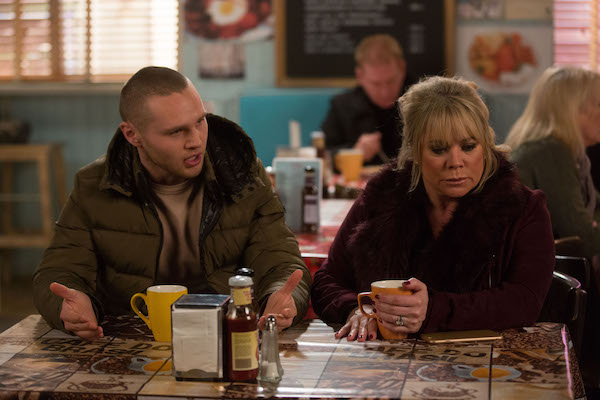 EastEnders SPOILER: Sharon horrified as she returns to catch Keanu and Louise

There’s heartache in EastEnders next week when Sharon Mitchell returns to Walford, leaving Keanu Taylor with a dilemma on his hands.

Last time we saw Sharon she was getting into a taxi and heading off to see best friend Michelle Fowler in Australia – leaving Keanu behind in Albert Square feeling alone and heartbroken.

After spending the last few weeks doing some soul-searching, Sharon is back. But where does this leave Louise and Keanu’s budding romance?

Before Sharon’s arrival in Walford, things seem to be getting more serious between Keanu and Louise as she studies for her driving theory test.

But when she passes and puts a photo of her and Keanu on social media, thanking him for his help, he asks her to take it down, secretly worried that Sharon might see it.

Louise is annoyed that he’s always blowing hot and cold, and to make up for his earlier outburst Keanu throws Louise a party to congratulate her.

The teenager is thrilled by his thoughtfulness, even though it was actually her best friend Bex’s idea, and she thanks him with a kiss.

But just as the pair are kissing, who should walk through the door unannounced, but Sharon.

The next day everyone is gathered in The Vic for Denise’s birthday, and Sharon and Keanu struggle to keep their eyes off each other.

Keanu is desperate to talk to his former fling and corners her in the toilets to find out where they stand now she is back.

Sharon can’t help but make digs about him kissing Louise, but Keanu is quick to point out she was the one who ended things before she went away.

Before they can finish their conversation Louise comes into the toilets and Sharon is forced to sneak Keanu out, leaving the pair none the wiser about where they stand.

Struggling to think about anything but Sharon, Keanu finds it hard to keep up appearances with Louise. It’s only when Sharon later makes it totally clear that it is over between them that Keanu is forced to make a touching gesture… but what has he got planned?

Read more: Viewers call for the axe to fall on EastEnders’ Mick Carter

It’s clear to everyone around him that Keanu isn’t right… and while Karen correctly guesses that it is Sharon who has put her son in a bad mood, Phil is busy making dad jokes about grandchildren, leaving Keanu mortified.

Grateful to escape when Phil sends him off to spend time with Louise, Keanu tries to make his romance with Phil’s daughter work. But with Sharon now back in the Square, is his heart really in it?

Someone is going to end up with their heart broken, but who?

Do you think Keanu should be with Sharon or Louise? Leave us a comment on our Facebook page @EntertainmentDailyFix and let us know what you think!