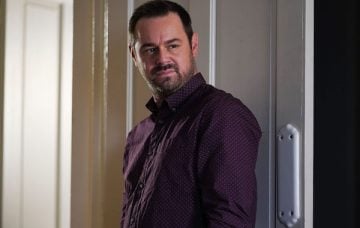 Viewers call for the axe to fall on EastEnders Mick Carter

He might have only just returned to screens following a three month break, but for some EastEnders fans it wasn’t long enough as they’re calling for Mick Carter to take a permanent break from the soap.

Mick has spent the last three months in prison for a crime he didn’t commit believing wife Linda had abandoned him.

And now it seems loyal fans are also abandoning their once favourite character.

Expressing their frustration with him on a DS forum asking fans to list the most overused characters in soap, Mick seemed to be the top of everyone’s list.

When one user commented: “I still don’t get people thinking Mick is overused, he was off screen for about three months and soon to be off for another two months,” they were met with the response: “He has hogged the limelight for a very long time.”

Another added: “Mick Carter – personally I think he should go on a permanent break and take his “L” with him.”

“Mick Carter. Absolutely no contest. It was either last year or the year before that Mick appeared in every single episode of the show that year up until the point where Danny Dyer was signed off sick with exhaustion. That is extreme,” said someone else.

Alongside Mick, the most popular choice was Alfie Moon, whose return to the Square has sparked a mixed response.

“Alfie – Whenever he comes back to Enders,” said one.

Another added: “Alfie Bloody Moon – The sooner he leaves my TV screen for good the better!!!!!!!”

“Lately everything is about Alfie and none of it is doing his character any favours, if anything his popularity is at rock bottom. Wherever Alfie is Kat is, scowling and being equally as unpleasant and their legendary couple status is now tainted and soured possibly beyond repair,” said a third.

Other soap characters to take a hit were the Dingles in Emmerdale.

“Chas. Charity. Debbie. These three have been on a loop for years and it is really tedious, even more so if like me you’re not a fan of any of them,” said one.

Someone else agreed: “The Dingles dominate way too much. Has to be good storylines, otherwise what’s the point?”

“Definitely the Dingles in Emmerdale. They are like a huge, stinky landfill site slowly taking over the whole soap,” added a third.

Unfortunately for Mick Carter haters, Danny Dyer has recently spoken about how he’s not leaving the soap.

In an interview on the EastEnders Twitter account he was asked if he was leaving and responded: “I ain’t going nowhere.”

You asked the questions. @MrDDyer gave us the answers. Find out what the Walford legend has to say about about all things #EastEnders.

He did say, however, that the decision doesn’t lie with him and it’s “the powers that be” who are in charge of Mick’s fate.

Sounds like he’ll be around for a long time yet.

Who do you think is overused in soap? Leave us a comment on our Facebook page @EntertainmentDailyFix and let us know what you think!