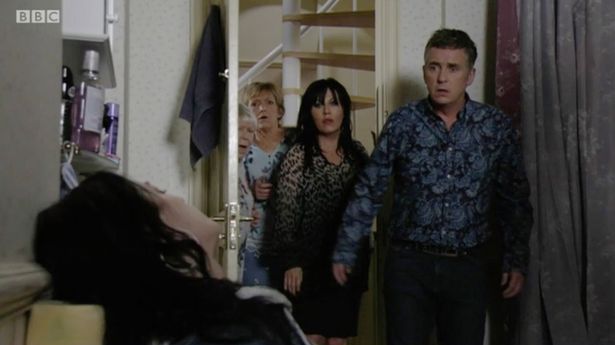 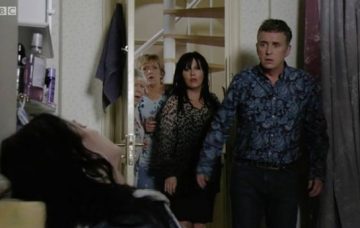 She drank a bottle of vodka and passed out...

Hayley Slater. never a popular character at the best of times, has pushed EastEnders viewers over the edge with her latest behaviour.

The troubled mum had soap fans enraged last night (Tuesday 15 January), when she drank a bottle of vodka and passed out drunk in the bathroom.

Pretty standard behaviour, you might think, but baby Cherry was left in the bath as her mum passed out unconscious.

Luckily for Hayley’s baby daughter, the rest of the Slater family – including Alfie – became suspicious and broke down the door to find Hayley unconscious and Cherry sat in the baby bath.

Fans were disgusted with Hayley and slammed her for being negligent and putting Cherry’s life in danger by neglecting her.

She hit the bottle after struggling with the pressures of life as a single mum.

Upset that she couldn’t breastfeed Cherry, because the tot is used to formula after being kidnapped by Alfie, Hayley turned to booze.

After Big Mo smelt alcohol on Hayley’s breath and started asking questions, Hayley locked herself in the bathroom with Cherry.

Putting her baby daughter in a small tub in the bath, she locked the door so no one could get in and continued to down the contents of the bottle.

Thank goodness, Jean suspected something was wrong when Hayley didn’t respond to her calls from outside.

Alongside Big Mo, Kat and Alfie, the concerned family unit managed to burst through the door and found Hayley in the sorry state.

They need to take that child of Hayley #Eastenders

Many BBC viewers could find no sympathy for Hayley, and instead blasted her for putting Cherry’s life in mortal danger.

One said: “Oh ffs Hayley is pathetic she needs that child taken off her #EastEnders.”

Another added: “They need to take that child of Hayley #Eastenders.”

Some fans even feared Hayley was dead, with one saying: “Omfg what? Is Hayley dead?”

Omfg what? Is Hayley dead? #EastEnders

Next week, Cherry’s dad Alfie goes missing, but is this connected to Hayley?

And will Hayley ever get the help she so desperately needs?

Do you have any sympathy for Hayley? Leave us a comment on our Facebook page @EntertainmentDailyFix and let us know what you think!