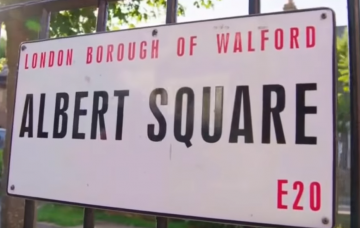 It is set to go over-budget by £27 million

The BBC boss has defended the spiralling cost of the new EastEnders set – insisting the current one is a risk to crew and cast members.

BBC Director General Lord Hall claims people on the Albert Square set need to be “moved” when there are “winds or rains” for fear of falling debris from the buildings, and he believes the BBC One soap’s editorial ambition will be “even greater than it is now” when the work is completed.

Speaking to defend the costs – which are expected to go over budget by £27 million – he told a parliamentary committee: “When there are winds or rains you have to move the people shooting stuff as things might fall off.

“EastEnders is the heart of the BBC schedule and it’s important we get it right. It’s delivering a reach of nine million people a week and it’s a really important part of the schedules.

“Once we finish this project, the editorial ambition of EastEnders can be even greater than it is now.”

There has also been a 31-month delay in the BBC completing the programme compared to its initial October 2015 plans, from October 2020 to May 2023.

The NAO claimed there have been “insufficient construction project management expertise”, among other issues, and that the construction, known as the E20 project, will not deliver “value for money”.

The report states: “The BBC built the external filming set for EastEnders (including Albert Square) in 1984, and originally planned to use it for two years.

“It has lasted for 34 years but is no longer fit for purpose.

“There are, for example, filming delays and maintenance costs as a result of stoppages in production due to health and safety concerns.

“The BBC will not be able to deliver value for money on the E20 programme in the way that it envisaged in 2015.

“Disappointingly, some of the reasons for this were built into E20 at the outset and could have been addressed earlier.

“These include insufficient construction project management expertise that contributed to a lack of appropriate technical challenge, inadequate integration between the programme team and end users, and early planning processes that led to underestimation of aspects of complexity, cost and risks of its revised approach.

“The programme costs have also been adversely impacted by inflation in the construction industry across the UK, which has had a greater impact than it would have done had the programme completed without any delays.

“E20 has been subject to ongoing scrutiny and reporting and, in the past 18 months, the BBC has made many improvements to the programme and various elements of E20 have been completed.

“Furthermore, the benefits of the programme still appear to be broadly achievable, albeit at a later date.”

But the BBC recently said in a statement: “The show remains one of the BBC’s flagship programmes and yet is filming from a set that is no longer fit for purpose.

“The new set will be suitable for HD filming for the first time and extend Walford to better reflect modern East End London.

“It’s a large, complex project which has already delivered many other vital improvements at BBC Elstree Centre but like any building work of this scale there have been challenges on the way, including construction market issues beyond our control and from working on a brownfield site.

“As the NAO recognises we’ve already made improvements and are keeping the project under close scrutiny.”