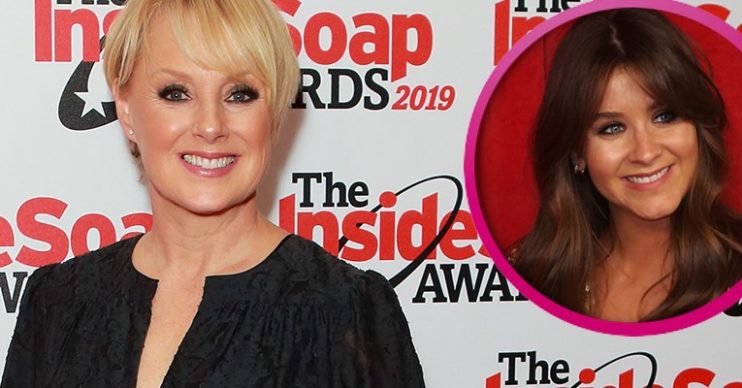 She let slip the news during an interview

And now it looks like Sally Dynevor (aka Sally Metcalfe) has let slip exactly when her on-screen daughter will be hearing the pitter patter of tiny feet.

Brooke announced her pregnancy back in April, but didn’t give an exact due date.

The actress finished filming at Corrie back in August and it seemed likely her baby was due in October.

There’s been no sign yet, but now Sally has revealed that we could get an announcement next weekend.

Speaking to The Sun, she said: “Helen [Flanagan, Corrie’s Rosie Webster] and Brooke are good. We had lunch together last week, which was very funny, we laughed a lot.

“Helen didn’t have her children with her and Brooke is off to have her baby, so she has her baby next weekend.

“It’s a very exciting time for the girls.”

Sally’s comments could suggest Brooke is booked in to have a cesarean section, or maybe that Brooke just has a feeling her little one will come then.

The star has been busy preparing for her baby as well as moving house all at the same time.

She’s kept fans updated throughout her pregnancy with various bump pictures, and has posted some inspirational messages for other mums-to-be.

On-screen Sophie left for Columbia to go travelling with Kate Connor on Wednesday (October 11) after inheriting thousands of pounds from her great aunt Vi.

Sophie had thought her girlfriend, lawyer Paula Martin would go with her, but Paula revealed at the last minute she had never intended to go along.

She knew Sophie wanted to go travelling and had concocted the plan to give her the push she needed.

Sophie was heartbroken, but realised Paula had done the right thing.

Brooke is expected to take a year’s maternity leave and then return to the soap.

Her on-screen sister, Helen, is also taking a break from the cobbles at the moment following the birth of her second child, Delilah.