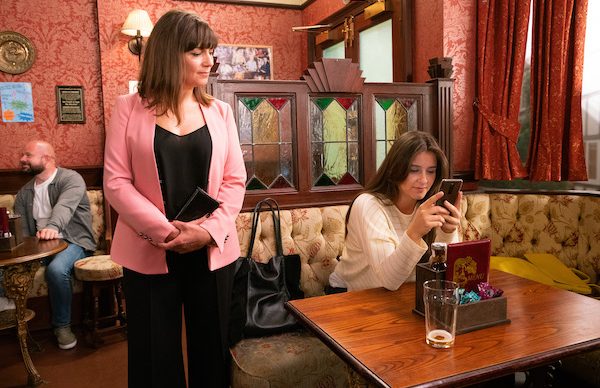 She'll leave to be with Kate

Sophie Webster is set to exit Coronation Street in the coming weeks as her alter ego Brooke Vincent goes on maternity leave.

Brooke has already filmed her final scenes for the soap, but they’ve yet to be aired on screen.

But this week sees the seeds of a departure sown.

Sophie has recently turned down the opportunity to go travelling with Kate Connor.

Soph decided to stay in Weatherfield with her lover, Paula Martin, and enroll on a business course instead.

It’s little wonder she’s questioning her decision when Kate sends her a photo – we know which we’d rather be doing!

Even though Paula tries to encourage Sophie in her studies by presenting her with a leather satchel and a new laptop for her first day at college, it quickly becomes clear Sophie’s heart just isn’t it in.

When her phone pings and she sees a photo of Kate sunning herself on the beach, it’s clear Sophie is regretting not going with her.

She’s unaware Paula is watching on – what will the solicitor do when she clocks her girlfriend’s true feelings about staying in Weatherfield?

As Sophie tries to forget the adventure she could be having and pours over her textbooks, it soon becomes clear the course is not for her.

It’s her aunt Debbie, whose return has put the cat amongst the pigeons for Kevin, who first calls Sophie out on how she’s feeling.

She senses Soph is just not enjoying the new course and urges her to follow her heart.

With the photo on her mind and Deb’s words ringing in her ears, will Sophie leave to go travelling after all?

Brooke’s baby is due any day now.

Last week she posted a photo to Instagram and declared she hoped it would be the last one she shared of her baby bump.

She announced her baby news earlier this year in an OK! interview and has been keeping fans updated with her pregnancy ever since.