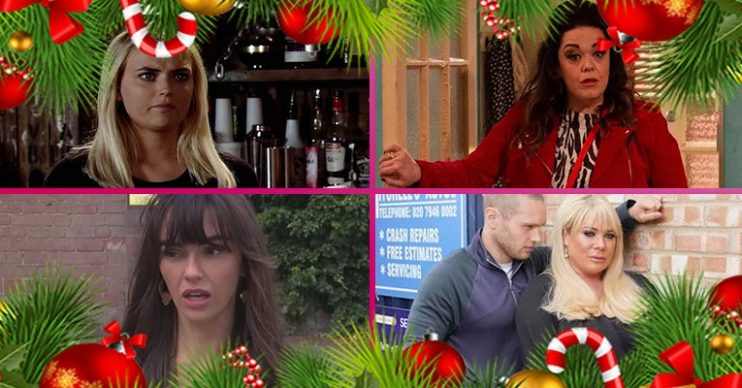 We know it’s not even been Halloween yet, but Christmas is only 76 days away, that’s only 11 weeks for Coronation Street, EastEnders, Emmerdale and Hollyoaks to kick off the beginnings of their big festive storylines. Christmas is arguably the biggest event in the soap calendar with all four soaps screening some of their most […]

We know it’s not even been Halloween yet, but Christmas is only 76 days away, that’s only 11 weeks for Coronation Street, EastEnders, Emmerdale and Hollyoaks to kick off the beginnings of their big festive storylines.

Christmas is arguably the biggest event in the soap calendar with all four soaps screening some of their most explosive storylines at that time of year.

Soapland is rarely a happy place during Yuletide, and it’s doubtful many – if any – characters will be on Santa’s nice list.

But who will be key to the big Christmas plots? Here’s all we know about the festive season so far…

With Bethany Platt actress Lucy Fallon set to exit early in the New Year, she has teased a big Christmas for her character.

“There’s quite a lot happening over Christmas,” she told Metro.co.uk.

“There’s a big episode on Christmas Day. It’s a secret though I imagine, I can’t tell you about that.”

So not giving much away, then, but given Bethany currently has feelings for Daniel Osbourne, whose wife Sinead is dying of cancer, it doesn’t look like a happy ending.

With Sinead set to pass away before Christmas, her family will be left reeling as they face their first Christmas without her.

They’re going to celebrate the season early to make her feel included, but with only weeks left for her to live, there will be a big hole at the Osbourne/Barlow/Tinker family table this year.

How will Daniel face his first Christmas without his wife? He’s set to turn to alcohol when she passes, but will he be able to cope without it long enough to give their son, Bertie, a memorable first Christmas?

Another story expected to culminate around Christmastime is the Robert/Michelle/Vicky love triangle.

Robert is engaged to both women and has even got Vicky pregnant, but they are set to find out the truth in explosive scenes coming up.

With Vicky’s baby due around Christmas and reports today suggesting Robert is set to be arrested for her MURDER, could he be facing a cold Christmas behind bars?

Paedophile Kel Hinchley also looks set for a violent Christmas as pictures have emerged on Digital Spy of girlfriend Bernie attacking him with a Christmas tree in the background.

Has she found out the truth about his abuse of her son, Paul?

Sally Dynevor recently told Metro.co.uk: “Well, I daren’t give anything away but there are some very, very exciting stories at Christmas.”

At the recent Inside Soap Awards Keanu Taylor actor Danny Walters revealed that the big reveal of his character’s affair with Sharon Mtichell will come on the big day itself.

In fact, show boss Kate Oates has said the reveal will not play out the way viewers might expect.

In an interview with The Sun Online she said: “What I like about it is all of the fall out, if I asked you to guess the fall out now, you wouldn’t guess what we’ve got.”

She had earlier this year told Metro.co.uk: “Of course, in true EastEnders tradition, Christmas is huge.

Fans are convinced that Keanu will DIE in the Christmas episodes…

Other storylines set to play out see Ben Mitchell and Callum Highway spend Christmas together – but it won’t be a quiet one for Ben, who has found himself in another feud with newcomers the Panesar brothers.

And Lorraine Stanley, who plays Karen Taylor, recently told Digital Spy that the Taylor/Bakers have “some unlikely guests” on Christmas Day.

With the Dales big October week coming up, not a lot is known about what will happen after that, but we know many of the storylines will feed into Christmas.

At a recent press event, show boss Jane Hudson said: “We’re currently storylining Christmas – we also have lots of secrets, lies and revelations; everything we have been building up to explodes at Christmas time.”

One of the key plots ongoing at the moment is Moira Dingle’s affair with farmhand Nate Robinson behind her husband’s back.

We know Cain is set to find out the truth before Christmas, but with the fallout set to be huge, the ramifications of the reveal will reach way into the future.

Sally Dexter, who plays Faith Dingle in the soap, has confirmed there will be a twist when it comes to Nate’s real identity that will have “dire consequences” for all involved – could he be a secret Dingle out for revenge?

Will he reform and be accepted into the Dingle fold in time for a big family Christmas? Seems unlikely…

The rest of the Dingles will be facing up to their first Christmas without matriarch Lisa, who passed away earlier this year.

Chas and Paddy will be welcoming their first festive season with their newborn baby, due in a matter of weeks, but with Chas’s son Aaron set to go on the run with husband Robert, will he be present to join in the seasonal celebrations?

Mandy Dingle actress Lisa Riley, who has recently returned to the Dales following a brief reappearance earlier this year, has also confirmed she will be part of the episodes, telling Radiotimes.co.uk: “We are just about to shoot these episodes and Mandy’s got her Christmas knickers.”

Bryan Kirkwood, head honcho at Hollyoaks, has revealed an innovative new way of story telling kicking off over the festive season.

The show will air its usual hour-long specials for both Christmas and New Year, but the New Year episode will actually be set on New Year’s Eve 2020.

“They are all doing their New Year resolutions and they flash forward to putting characters in screaming, agonising jeopardy 12 months hence.

“It book ends our next big important storyline which is about County Lines drug dealers and how they invade a community and a school like Hollyoaks High. Lovely kids like Charlie and Ela become embroiled in really horrible, real life and current situations.”

With a big October stunt coming up later this month leading straight into the ‘Who Shot Mercedes?’ storyline that Bryan has already confirmed, it’s likely that by Christmas we’ll know exactly who wanted Mercedes dead – and why.

Will Tony be out of the pig pen by Christmas? With Breda’s storyline culminating in a special Hollyoaks Later episode in January, it might be a very lonely – and smelly – Christmas for Hollyoaks’ longest-serving star…

Are you looking forward to Christmas in Soapland? Leave us a comment on our Facebook page @EntertainmentDailyFix and let us know what you think!