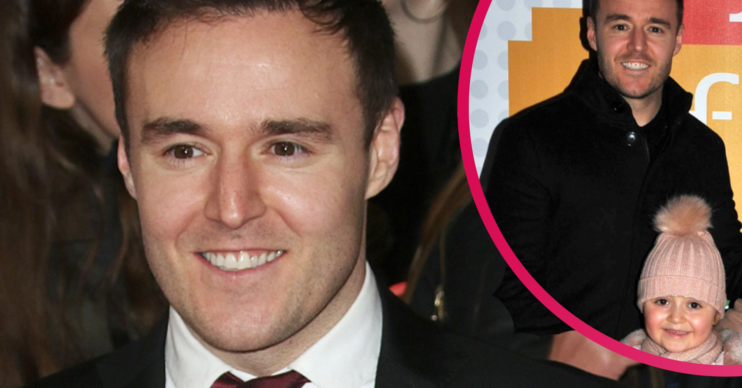 Actor Alan Halsall has been spotted enjoying a family day out with girlfriend Tisha Merry and daughter Sienna-Rae.

The Coronation Street star – who is best known for playing Tyrone Dobbs on the ITV soap – was joined by the two at Rivington Pike in Lancashire over the weekend.

He documented the outing with a selection of snaps on Instagram, telling fans: “NOW that’s what I call… SUNDAY !!!! 👨‍👩‍👧 .”

The shots show Alan, 38, and his family in workout gear at the walking viewpoint.

The soap star and daughter Sienna can be seen posing on a tree in one shot, while another shows Tisha and the six-year-old holding hands in the woods.

There’s also a selfie of the three together as they tuck into ice cream mid-walk.

And the treats certainly didn’t end there, with the family later enjoying a delicious Sunday roast in Alan’s Manchester home.

Read more: Helen Flanagan shows off new look after allowing her children to do her makeup

Updating fans on their day out on Instagram Story, Sienna said: “Hi everyone! I’ve had a lovely, lovely day walking up Riverington and coming back to a warm Sunday dinner.”

The youngster then went on to pick a movie from a random selection, with the winner being Cinderella.

Fans were delighted to get a look at Alan and Tisha’s day out with Sienna.

One wrote: “Love the pics such a lovely family x.”

Another added: “Your daughter is a star 🌟.”

The relationship was the first for Alan following his divorce from Lucy-Jo Hudson, who also appeared in Corrie from 2002 until 2005.

Earlier this month, the star admitted there are “ups and downs” with a blended family, but his daughter “comes first”.

While he doesn’t have “a great deal of communication” with ex Lucy- Jo, his daughter has a lot of love in her life.

Alan said: “There’s always going to be ups and downs with a blended family.

The former couple gave a glimpse into potential tension last year following the birth of Lucy-Jo’s son with Lewis.

The actor posted a long message about newborn Carter, which included a mention of Sienna.

“Our Sienna is delighted and is already making the best big sister, just like I knew she would”, he wrote, which Alan seemed to take exception to.

Alan posted a message on social media, before deleting, saying: “You’re welcome to keep the lying cheating one & call her your own! But not my daughter.”

Meanwhile, Tisha has praised Alan as a great dad, admitting he is “so caring and loving.”

She said: “He’s such a good dad; he’s so caring and loving.